Will in the Middle

Shakespeare scholarship is one of the world’s thriving industries, with no factories but worldwide workshops. While you are reading this, there must be hundreds (thousands?) of worthies turning out articles and books from pole to pole. But ­Garry Wills has upped the ante with a simultaneous pair of books. Though modest in size (hardly a drawback), they gain added interest from being the works of an eminent historian who has frequently ventured elsewhere — e.g., to the Roman poet Martial and St. Augustine — but here strikes out into, for him, not entirely new but for many of us surprising territory. 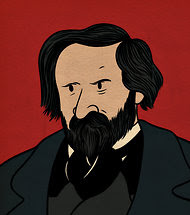 Right - Giuseppi Verdi.
The longer of the books, “Verdi’s Shakespeare: Men of the Theater,” is as much about the playwright as about the composer turning three of the plays into operas. “Rome and Rhetoric: Shakespeare’s ‘Julius Caesar’ ” is about Roman history interpreted and reinterpreted by Shakespeare, largely through the four principal characters in “Julius Caesar.” Even more than their actions, Wills examines their diverse individual rhetoric.
The shorter book is a reworking of the Anthony Hecht Lectures delivered at Bard College in 2009, and is in the main what the French call explication de texte and we, textual analysis or close reading. The oratorical and conversational styles of Caesar, Anto­ny, Brutus and Cassius are scrutinized for the use of such devices as ironia, praeteritio (making a point by saying one would avoid it), interrogatio, partitio (breaking down a theme into its parts), anaphora (beginning consecutive phrases with the same word), aposiopesis (stopping in mid­sentence and scoring through implication) and chiasmus (phrases or clauses in mirror image, e.g., Quintilian’s “I live not in order to eat but eat in order to live,” a sort of crossed order), which, for some reason, Wills calls chiasm.
Full story at the New York Times.
Posted by Beattie's Book Blog at 6:27 am