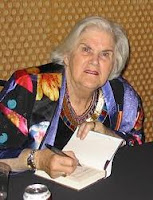 AMERICAN sci-fi and fantasy writer Anne McCaffrey has died at her home in Ireland, her publisher Random House announced today.
"It is with great sadness that Del Rey Books and Random House report the passing of beloved author Anne McCaffrey," Random House said in a statement.
"McCaffrey died at her home in Ireland on November 21st shortly after suffering a stroke. She was 85-years-old," the statement said.
The author - who was best known for her popular Dragonriders of Pern novels - was born on April 1, 1926, in Cambridge, Massachusetts, the daughter of a retired US Army Colonel and a real estate agent, and one of three children.
McCaffrey graduated from Radcliffe College, majoring in Slavonic Languages and Literatures, and in her lifetime, published more than 100 books, starting with Restoree in 1967.
"Her first novel, Restoree, was written as a protest against the absurd and unrealistic portrayals of women in s-f [science fiction] novels in the 50s and early 60s," a statement on her website said.
In the late 1960s, McCaffrey won a Hugo Award, becoming the first woman to take the honour for a work of fiction, MSNBC reported, adding that she was inducted into the Science Fiction Hall of Fame in 2006.
The novelist moved to Wicklow County, Ireland in 1970 and lived in a house she designed and named Dragonhold-Underhill, because "she had to dig out a hill on her farm to build it".
McCaffrey's ex-husband Horace Wright Johnson passed away in 2009. She is survived by her two sons and a daughter.
Posted by Beattie's Book Blog at 10:52 am