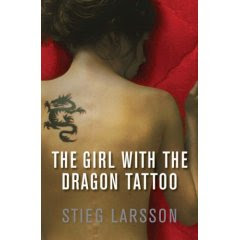 THE GIRL WITH THE DRAGON TATTOO
Stieg Larsson - MacLehose Press - $38

Crime fiction is the largest of the various fiction genres in terms of numbers published and number sold. There are so many that when reviewing for the Sunday Star Times I select five of the best from those submitted to briefly review each month.
Every now and again however a title comes along that books editor Finlay Macdonald thinks is worthy of being reviewed alone and rather more fully.
The Girl with the Dragon Tattoo he felt was such a title. Having just read it in three very long sittings I can confirm his judgment was spot on.

My goodness what a triumph. I quickly became totally immersed in the complex plot and seduced by the wonderfully drawn characters and the evocative sense of place.
I am delighted to now learn that this is the first part of a trilogy, the Millenium Trilogy, so I am to read more of these interesting protagonists. Excellent.
There is a twist though. The Millenium Trilogy was published in Scandinavia and continental Europe to great acclaim between 2004 and 2007, after Larsson’s death.
Only now are the books being translated into English.

Larsson himself was a journalist and a leading Swedish expert on right wing extremism. He was the founding Editor of Expo magazine which he set up top combat racism. He was a campaigning journalist for causes close to his heart.
Apparently he wrote his trilogy in the late evenings after work and is said to have enjoyed the writing process so much that he was well into the third book before it occurred to him to approach a publisher. How sad that he didn’t live to see his work so widely admired, so commercially successful and so critically acclaimed. The second and third titles in the trilogy have both won crime fiction awards in Scandinavia. These books have sold millions in Europe, it is no exaggeration to say that Larsson is a publishing sensation, and although we in the English-speaking world may not know his name I suggest this is all about to change.

Like his creator, our first principal character, Mikael Blomkvist, is also a journalist with a conscience, and when the story opens he is in serious trouble having lost a criminal libel case against a corrupt Swedish industrialist who is ripping off the Swedish government by setting up fake businesses in Russia. At the time Blomkvist is editor and co-founder of the monthly Millenium magazine has something of a crusading, hard-hitting anti-corruption bias.
His reputation though is now in tatters and he seems unemployable when out of the blue he is approached by the lawyer of another industrialist who wants him to find out what happened to his much-loved great niece Harriet who went missing in very suspicious circumstances nearly 40 years ago.

Blomkvist is reluctant o get involved but has his mind changed when the lawyer offers money to help keep Millennium afloat and also says his client will give the dirt on the corrupt industrialist when the job is done. He leaves the city and heads for the small town on the remote island where the benefactor industrialist lives and from where his great nice disappeared years before.
He soon realizes there have been a number of murders of women near the area around the same time that Harriet disappeared. He is not making a lot of progress however until he hooks up with the tattooed girl of the book’s title. She is in her early 20’s a punk, a computer hacker extraordinaire, she’s a rebel, fearless, a kick boxer, a ward of the court, bisexual and terribly dysfunctional. These two make something of a formidable, if somewhat incongruous couple and there is even a skilfully handled and credible love element.
They work together as they try to solve the awful mystery of Harriet’s disappearance- her body was never found - and believe me it is truly awful.

This is a powerful, passionate, wonderful piece of writing and I am impatient to receive the next title in the series. Not surprisingly the film rights have been sold.
How sad that Stieg Larsson’s great crime writing career is going to go no further.

This is the first title to be published by MacLehose Press, a new imprint of Quercus Publishing. It is headed by Christopher MacLehose who while with Harvill formerly brought to the English speaking world acclaimed authors like Fred Vargas, Henning Mankell and Jose Saramago.
Posted by Beattie's Book Blog at 6:48 am