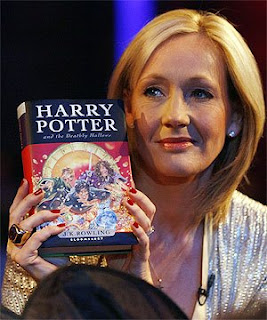 Bloomsbury, the publishing house behind the Harry Potter phenomenon, is facing a growing revolt from some of its leading authors upset by its "obsession" with JK Rowling, it emerged yesterday.

The Daily Telegraph disclosed on Thursday that Joanna Trollope, the best-selling writer known as the Queen of the Aga Saga, is defecting to a rival publishing company, Transworld.
Some of her fellow authors are also said to be upset by Bloomsbury's apparent preoccupation with the Harry Potter books, which have sold more than 400 million copies worldwide, at the expense of their own work.
Trollope is leaving the company after complaining that Nigel Newton, the chief executive, and his management team have become preoccupied with satisfying the City and shareholders, and claims they are no longer interested in fully promoting any authors except Rowling.
She is said to be impressed with the way Transworld has absorbed the publishing phenomenon of Dan Brown and The Da Vinci Code, while still marketing its other authors successfully.

Bloomsbury is home to a number of popular authors including William Boyd, Susan Hill, Peter Carey and Will Self. Some of the authors there remain loyal, others share Trollope's concerns, with one saying: "They should publish one final book called Harry Potter and the Poisoned Chalice."
One agent who has several top writers with Bloomsbury, and who did not want to be named, said: "There are things about Bloomsbury that are wonderful, but they have lost their way a bit.
"When you have such an overwhelming success as Harry Potter it does sort of derail other things.
"There is a definite feeling that the Harry Potter phenomenon has led to other authors being neglected somewhat."
Although Rowling has written her seventh and last book about the schoolboy wizard, Bloomsbury's Harry Potter juggernaut rolls on.
The company is gearing up for yet another marketing push for the paperback edition of Harry Potter and the Deathly Hallows, which hits the shops in July.
For the rest of the story lnk here to the Telegraph
Posted by Beattie's Book Blog at 8:43 am