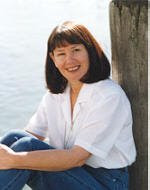 One of New Zealand's finest writers of fantasy for children, Sherryl Jordan, has just published the fourth title in her hugely popular series featuring the young wizard Denzil.
The first book in the series, The Wednesday Wizard, was published way back in 1991 long before anyone had ever heard of Harry Potter! 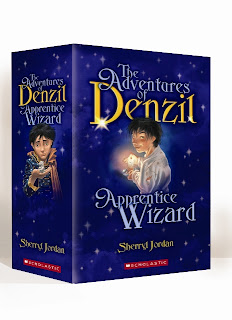 Now the latest, The Silver Dragon, has been published by Scholastic and to mark the occasion they have published all four titles in the series in a magnificent boxed set. The books can also, of course, be bought individually.
Author pic from the NZ Book Council website. She is also profiled on teenreads.com. And on the excellent Christchurch Library website.

And who will ever forget her wonderful novel, ROCCO? First published in 1990 and sold around the world it remains in print to this day.
Yesterday the following comment, in reponse to a Harry Potter item, appeared on my blog.
Yes and now hopefully HP fans around the world will continue on and look for some other fantasy and stumble on the likes of outstanding writers like MM and Sherryl Jordan, whose publishers I would like to assume have put aside some promotional money ready for the gap in the market! I know that Jordan's Denzil series is being reprinted, and about time too! (the boxed set is being launched in Tauranga in August...can't wait)Lee
Lee makes a good point so if you are a parent/grandparent, or teacher or librarian and are looking for something for your kids to read after Harry Potter then be sure to have a look at Denzil. He's a wizard! In fact steer them towards any of Sherryl Jordan's books.
Posted by Beattie's Book Blog at 10:33 am

Hi Graham. Thanks for picking up on the news about Sherryl Jordan's books. Wonderful! They will be launched at the Bookrapt Annual Seminar "Real Men Write"
in Tauranga on Saturday 4 August. The seminar speakers are Ken Catran, Phil Smith, and Brian Falkner. And as well as launching the boxed set of Sherryl Jordan's books on the day, we will also be launching Phyllis Johnston's new novel Dead Dan's Dee published by Longacre. For more details about the seminar and how to register go to www.bopcla.co.nz or email lois.rout@xtra.co.nz Everyone is welcome to come along, but please register quickly as places are limited. (Bookrapt is new name of the Bay of Plenty Children's Literature Association Inc. )

Lee Rowe
on behalf of Bookrapt

actually try this address to get to the bookrapt webpages as the address given in my previous comment doesn't seem to be working right now: