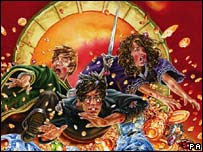 HARRY POTTER AND THE CURSE OF OVERWRITING

With all the amazing hoopla surrrounding Harry Potter and the Deathly Hallows, which I admit I contributed to, I greatly enjoyed reading this refreshing piece from Finlay McDonald in the Sunday Star Times this past Sunday:

And so the world awakes to news of the boy wizard's ultimate fate. Did Harry Potter vanquish He Who Shall Not Be Named? Or did His Imperial Not Niceness prevail? Did they both perish, like Sherlock Holmes and Moriarty? Or has JK Rowling left the last page open for yet another episode, despite swearing she wouldn't? Has the world's media had its fill of the "frenzy of anticipation", and are we sick of the term "spoiler alert" yet?
Personally, the end couldn't come soon enough for this veteran of the Potter chronicles.
Having two children just far enough apart in age has meant I have laboured through roughly a decade's worth of bedtimes, trawling through at least four of the books twice, increasingly finding myself drawn to the dark side and willing Voldemort and his Death Eaters to an early victory.A futile hope. The publishing juggernaut and its cinematic equivalent was apparently set in stone from day one, when the central character leapt unbidden into his author's head - as if by magic, you might say! - while she sat daydreaming on a train.
It didn't take supernatural powers to work out that each book would end with Harry's nemesis surviving to fight another battle. Much wand waving and mumbo-jumbo would ensue, and like any third rate thriller, each narrative's many hanging threads would be trimmed away with convenient explanatory dialogue.
Unlike most of the rest of the world, I seem to have become less of a fan as the series ground on. The first book, Harry Potter and the Philosopher's Stone - at a relatively slim 250 odd pages - seemed inventive and fun, combining several well-worn themes of junior fiction into something, if not new, then undeniably entertaining. By the third book, Harry Potter and the Prisoner of Azkaban - still a mere 300 pages - Rowling was in command of her subject, mixing just the right measures of invention, adventure and characterisation to drive the story forward efficiently.And then something happened. Maybe it all just went to her head, but the books suddenly became turgid and hideously overwritten.
I'm sure there are devotees casting the Cruciatus Curse at me as they read this, but they'll have to accept the separate but similar verdicts of my bedtime companions, too: both eventually gave up on Harry Potter because he got too boring.The books literally doubled in size. Inside each of them - The Goblet of Fire, The Order of the Phoenix, The Half Blood Prince - was a smaller and much better book struggling to get out, but subsumed in a mass of expository landfill. Daily life at Hogwarts became repetitive, maddeningly drawn out, often tediously tangential or inconsequential. Bedtime stories shouldn't actually put children to sleep.A matter of taste? Maybe.
But that doesn't explain away the observable decline in Rowling's writing as her bank balance increased. She's particularly hopeless with dialogue, needlessly signalling who is speaking at all times, never allowing a character to simply say something without redundant adverbial baggage..."Hermione said shrilly", "Harry said dully (two of her favourite clunkers) or, unforgivably, "he asked inquisitively". Does being Britain's second richest woman mean you don't need an editor, or simply that the editors are too scared to touch a word of your obese manuscript?You can see from the films, which are still good fun, how much better the stories are for a little compression and elision - although it's also plain from the latest, Harry Potter and the Order of the Phoenix (perhaps the low point in the book cycle), what a struggle it is to render the central conflict between good and bad magic compellingly.Oh well, one billion muggles can't be wrong.
And I certainly don't wish to be aligned with any of the nuttier detractors of Harry Potter, namely the fundamentalist Christian types who happily believe woman was created from the rib of a man, yet decry other fictional depictions of magic for fear the original He Who Shall Not Be Named might be encouraged.If it's real serial publishing evil they're worried about, they might take the time to peruse the abominable but hugely successful Rainbow Magic phenomenon, an industrial-scale exploitation of little girls' perennial fixation with fairies.
Thankfully my own fairy freak has recently graduated - to my enormous surprise - to Enid Blyton's Famous Five books. They too were frowned upon by do-gooders in their day for a supposed lack of literary merit, although talk of actual library bans was apparently overstated.But for all their quaintness and anachronistic stuffiness in the MySpace age, these tales of Julian, Dick, Anne, George (Georgina, the girl who longs to be a boy - oh Enid!) and Timmy the dog could still teach Rowling a thing or two about pace, plotting and economy of style.
Mind you, staring at the 20 or so titles in the series, not to mention all the rest of Blyton's mammoth oeuvre, there's something to be said for a little finality.No, Rowling must never be allowed to do a Conan Doyle, who gave in to public pressure and brought Sherlock Holmes back from the grave, and be allowed to resurrect her hero. Harry Potter must die, one way or another. Please, let it be over.
Posted by Beattie's Book Blog at 5:59 pm

Well said Finlay.
I felt the same: 1,2 and 3 were enjoyable to read, 4 got tedious and so I didn't bother with 5 and 6. Do skilled editors with guts still exist in the majority of publishing houses? Thank goodness it's over; I still don't know the ending and may eventually have to ask ...... for a whole week noone has felt compelled to tell me , maybe it's just too boring.
I do think J.K. Rowling is fabulous, just that someone should have been brave enough to curb the excess.

Yes I agree with findlay's comments too. I gave up reading HP aloud to my kids after no 3, and left it to them, just couldn't hack it any longer, tedium is exactly the right word, but luckily they were old enough to read the books by themselves by then. Probably the books are best read silently - then you can easily skip the endless redundancies. Findlay's example "inquisitively asked", just takes the cake doesn't it. Oh well, still great books, great story, great characters, - can't dispute the impact they've had on kids' reading habits. Bu like a grapefruit they would be best halved.
And Graham - this is what I like about your blog. You cover all aspects of what makes the book world so exciting. In the case of HP you quite rightly participate in the celebrations, but also include this reflective criticism from the SST. Good one. Ta.
Lee