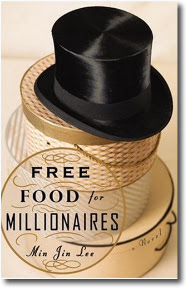 I reviewed this book on Radio New Zealand National earlier today. Here are my notes which are rather more comprehensive than I had time for on air..

This is a first novel and remarkably it runs to almost 600 pages so an ideal plane or beach read. As a debut it is an impressive accomplishment

It is the story of first and second generation Korean immigrants to New York and the resulting cultural clash between the immigrants and those already long-established citizens but even more the story of the clash between the Korean parents, steeped as they are in their beliefs and values, and their children who strive to rapidly become Americans and take up Western values and beliefs.

I was interested to read that the author was born in Seoul, Korea in 1968 who at the age of seven emigrated with her parents and two sisters to New York. So one can reasonably assume that this is a story written out of that experience which I guess is why it is such a totally believable story. Her protagonist is a young Korean American, Casey Han, who has grown up in New York, she is the elder and feistier of two sisters who are both now in their 20’s, and Casey is experiencing serious tensions with her parents who live in Queens and manage a Manhattan dry cleaning business. The gulf of understanding between them is ever-widening

This is how the book begins:

As a capable young woman, Casey Han felt compelled to choose respectability and success. But it was glamour and insight that she craved. A Korean immigrant who’d grown up in a dim, blue-collar neighbourhood in Queens, she’d hoped for a bright, glittering life beyond the workhorse struggles of her parents………..
Casey was unusually tall for a Korean, nearly five feet eight…..for a girl of only twenty two she had numerous theories on beauty and sexuality, but the essence of her philosophy was that allure trumped obvious display. She’d read that Jacqueline Kennedy Onassis advised a woman to dress like a column, and Casey never failed to follow that instruction.

I guess you could say that Casey was in pursuit of the American dream. But she learns early on that keeping up with the Joneses isn’t easy even for a fashion-conscious, attractive young woman with a degree from an Ivy League college.

Early on she is kicked out of home by her father following a huge family row caused by what the father views as insolent behavior. To make ends meet she undertakes a variety of part-time jobs and stays with various friends.

As the story develops, and it takes place over about 4 years, we meet a myriad of well-drawn characters, friends and family and business colleagues, both Korean and European Americans and various sub-plots develop with Casey being the common link to all these storylines.

But it is Casey’s family, romantic and financial struggles with all their numerous ups and downs along the way that always takes centre stage.

Author Min Jin Lee lives in New York with her husband and son. She was a lawyer for several years before giving up the law to write fulltime. Her short stories have won her several awards and I am sure we can expect more novels after the robust praise she has received for FREE FOOD FOR MILLIONAIRES.

Her cause was greatly helped by an interview in Newsweek magazine where they talked of her novel being “showered with praise” and where she was described as “an overnight sensation”.