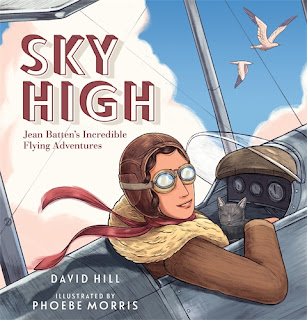 This stunning picture book tells the true story of how Jean Batten became
an international superstar for her solo flights across the world.
The little plane has been flying across the sea for eight hours.
Huge black clouds surround it. Rain pours in. Wind slams.
The aircraft is tossed around like a leaf.

The pilot stares into the darkness. How much fuel is left? Is she flying in the right direction?
How long till she reaches land?
In 1934, Jean Batten set a world record for the fastest flight from England to Australia. Just
two years later, she made the first-ever solo flight from England to New Zealand. Jean’s
fearless determination and flying skills helped her survive storms and crashes, as she
crossed great oceans and lonely deserts in her tiny plane.

This gripping true story with its dazzling illustrations is the third from the award-winning
creators of the picture books First to the Top and Speed King.

More about David Hill
David Hill is a prolific and highly regarded New Zealand writer, playwright, poet, columnist
and critic. Best known for his very popular and award-winning body of work for young
people, ranging from picture books to teenage fiction, his novels have been published all
around the world and translated into several languages, and his short stories and plays for
young people have been broadcast here and overseas.
David has won a number of national and international awards for his writing and was made a
Member of the New Zealand Order of Merit in 2004. Most recently, Speed King was a 2017
Storylines Notable Picture Book and First to the Top (2016) won the HELL Children’s Choice
Award for Non-Fiction and was also a 2016 Storylines Notable Picture Book. Enemy Camp
(2016) won the 2016 HELL Children’s Choice Award for Junior Fiction. Brave Company
(2014) was also a Storylines Notable Junior Fiction book. My Brother’s War (2012), won
the Junior Fiction and the Children’s Choice Junior Fiction awards in the 2013 New Zealand
Post Book Awards for Children and Young Adults, as well as a 2014 IBBY Honour Award.

Posted by Beattie's Book Blog at 7:30 am