We have decided after over 30 years of publishing New Zealand books under the Grantham House imprint to fold the tent… The printer’s ink running through my veins is starting to thin and as I am going to be nearer 90 than 80 in a few month’s – it is time to lay down pen and paper.


Eighteen months ago my wife Annie suddenly became visually impaired, she now has only 5-per-cent of vision.  Then six months ago we were trashed in the 7.8 earthquake on 14 November and had to live in a temporary apartment while remedial work was undertaken.  Before the earthquake I used to joke that living on Level Eleven was near to heaven at One Market Lane... it just about happened!


We have been fortunate over the years to have had the services of many well-known marketing people in the book trade; in more recent years, the Books R Us team led by Murray Brown, Julie Balfour and the on-road guru’s, Gary Shannon. Dennis Morgan, and Jeremy Bliss of South Island fame; all ably supported by the warehousing and distributing of David Bateman, thanks to Paul Parkinson.  From an editorial view point, our first editor Anna Rogers set the tone of the House.


Of course I have witnessed many changes over the decades in the book world which has been both challenging and simulating – even remembering the old Office Supplies retail outlet on the corner of Hastings and Tennyson Streets, Napier, magically becoming Beattie and Forbes Booksellers – and when they kindly did a window display on my first published book in 1973 by Reeds.


I will certainly remain an avid reader of Beattie’s Book Blog which has been most supportive of Grantham House titles over the years – so a special thank you to you Graham. 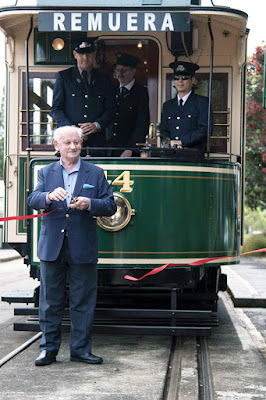 Photo shows Graham at Motat when he was the guest of honour at a function that commemorated the running of the last tram through the streets of Auckland 60 years ago last December.

Graham Stewart MNZM, is a photographer, writer and book publisher who has been recording New Zealand’s history since the early 1950s. His career in publishing extends over 60 years.

Graham’s first job was as a photo-journalist with the New Zealand Herald and The Weekly News. He covered the 1951 waterfront strike; Ed Hillary’s wedding in September 1953, travelled in royal cavalcades with the Queen (1953), the Queen Mother (1958). Other assignments included the tragic Tangiwai railway disaster in 1953, the famous Springbok tour in 1956; the construction of the Auckland Harbour Bridge, he was in the co-pilot’s seat when Freddie Ladd, an Auckland personality in the 1950s, flew illegally under the Auckland Harbour Bridge. He rode horse back with back country folk in the heart of the South Island when doing photo essays for the Weekly News – a few highlights from his early years.

He was a staff photographer for the Napier Daily Telegraph from 1959 to 1964, returning to Auckland to become the illustrations editor of the New Zealand Herald.

His first book, The End of the Penny Section, became the best-selling New Zealand book when published in 1973.

He came to Wellington in January 1975 as an executive director for the old publishing house of A.H. & A.W. Reed – once a household name in New Zealand publishing.

Over the years, his own imprint, Grantham House (establshed1985), has published a wide range of books on subjects as varied as a clairvoyant’s life to rugby trivia.

He was acknowledged by the Department of Conservation as the prime mover in 1956 to establish the first transport museum in New Zealand.  He was a founder of the Museum of Transport and Technology at Western Springs, Auckland.

He became a member of the New Zealand Order of Merit in 2011 for services to historical research and photography.
In October 2011 he was awarded the Absolutely Positive Wellingtonian Award by the Wellington City Council.
In October 2013, the Mayor of Wellington presented him with the National Press Club’s Lifetime Achievement Award.
He is the author of 22 historical books.
We wish all the very best for your retirement Graham.

Posted by Beattie's Book Blog at 8:01 am