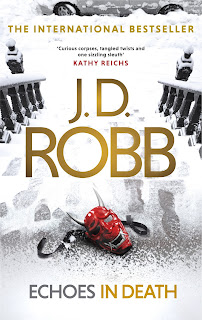 New York at night. A young woman stumbles out on to a busy street - right in front of Lieutenant Eve Dallas and husband Roarke. Her name is Daphne Strazza, and she has been brutally assaulted. Confused and traumatised, she manages to tell them one thing.

Her attacker wore a devil's mask.
As Eve investigates this shocking case, she soon discovers a disturbing pattern. Someone is preying on wealthy couples, subjecting them to a cruel and terrifying ordeal. Worse still, the attacks are escalating in violence and depraved theatricality. Eve and her team are now in a race against time to find the man behind the mask - before he strikes again.

About The Author: Nora Roberts published her first novel using the pseudonym J.D. Robb in 1995, introducing readers to the tough as nails but emotionally damaged homicide cop Eve Dallas and billionaire Irish rogue, Roarke. With the ‘In Death’ series, Robb has become one of the biggest thriller writers on earth, with each new novel reaching number one on bestseller charts the world over.

Author Website: www.jdrobb.com
Posted by Beattie's Book Blog at 8:06 am