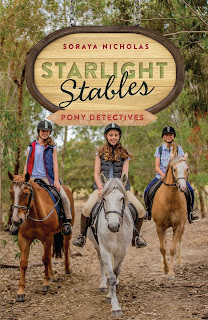 Pony Detectives (Book 1)
Gymkhana Hijinks (Book 2)
by Soraya Nicholas
The first two books in a heart-warming new series from a New Zealand author, about the horse-riding adventures of three pony-crazy friends.
Starlight Stables is the beautifully-written new series from internationally successful author Soraya Nicholas, whose award-winning contemporary romance novels (written as Soraya Lane) have kept fans around the world captivated. Now in this new series aimed at 8 to 12-year-olds, Nicholas weaves strong stories with universal themes, such as friendship, peer pressure, loss and bereavement, around the adventures and antics of three horse-crazy friends.
In Pony Detectives, Poppy is thrilled to be back doing the one thing she loves – riding horses at Starlight Stables – especially when her aunt and uncle surprise her with her very own horse. But there’s a catch. Poppy must look after the new scholarship girls. And something strange is happening around the local farms – horses are going missing. Will the bold, funny and troublesome Milly and shy, pretty and sensible Katie be a help or a hindrance to Poppy achieving her Pony Club dreams? And will Poppy and the girls be able to find the missing horses? 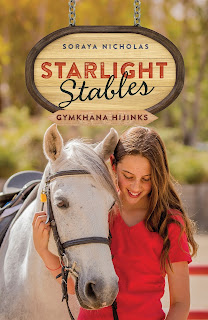 In Gymkhana Hijinks, Poppy, Milly and Katie are back at Starlight Stables, preparing for their first big Pony Club competition, and they’re not alone – a rival competitor arrives to train with them. All of a sudden, trouble seeks the girls out at every turn. Is it just coincidence? Or is someone trying to sabotage the three friends’ chances of winning?

Starlight Stables is a gripping and gratifying series about friendship between adventure-loving, horse-crazy girls. And as their friendship blooms, so too do their adventures.
Published 1 April - Puffin  - RRP $15.99

About the author:
Soraya Nicholas is the internationally award-winning author of more than 25 contemporary romance and women’s fiction novels, writing as Soraya Lane. As a horse-crazy girl, Soraya dreamt of owning her own pony and riding every day.
For years, pony series like The Saddle Club had to suffice, until the day she finally convinced her parents to buy her a pony. There were plenty of adventures on horseback throughout her childhood, and lots of stories scribbled in notebooks, which eventually became inspiration for Soraya’s very own pony series.


Soraya now lives with her husband and children on a farm near Christchurch, surrounded by four-legged friends, and still vividly recalls what it felt like to be 12 years old and head over heels in love with horses.