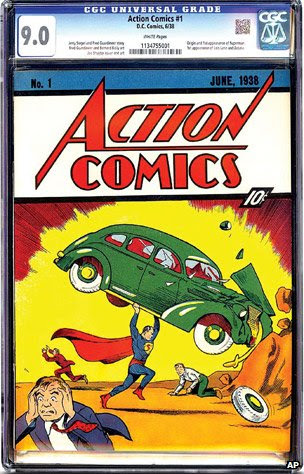 Some 200,000 copies of the comic were printed in 1938 - but very few have survived in good condition

One of the best-preserved copies of the first Superman comic has sold for $3.2m (£1.9m), a record price for a comic book, according to eBay.
Superman made his debut in Action Comics #1, which cost 10 cents in 1938.

Only around 50 unrestored originals are thought to have survived, and this was described as the most immaculate.
New York dealers Metropolis Comics said they bought it. It beat the previous record of $2.16m (£1.4m) set by another copy of the same comic in 2011.

The latest copy to be sold was given a nine out of 10 rating for its condition and has white pages, according to independent comic book grader Certified Guaranty Company.
It had been kept in a cedar chest in a home in West Virginia after being bought in 1938, according to seller Darren Adams.

More
Posted by Beattie's Book Blog at 6:52 am