A Tale For The Time Being - review by Nicky Pellegrino 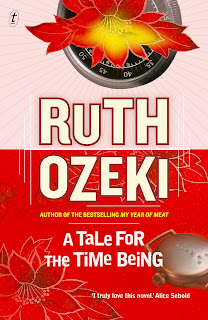 You are never going to get anything less than profoundly interesting from a writer who is also a Zen Buddhist priest. It struck me while reading A Tale For The Time Being by Ruth Ozeki (Text, $40), that both the author and her novel are considerably smarter than I am. Still it was well worth the brain stretch required at times to appreciate it fully.
This is a book that plays with reality and is filled with philosophical ideas, science and life lessons. The story is told for the most part in two voices. Author Ruth lives on a remote island in British Columbia with her partner Oliver (just like the real-life Ozeki). One day she picks up a piece of flotsam on the beach, a plastic freezer bag containing a Hello Kitty lunchbox. Inside she finds some letters written in Japanese, a journal in French and a copy of Marcel Proust’s A La Recherche Du Temps Perdu which turns out to have been “hacked” – the printed pages have been cut out and replaced with blank paper covered in adolescent purple handwriting.
Ruth begins to read, discovering this is the diary of a Japanese teenaged girl, Nao Yasutani, that she presumes has been swept onto their shores in the drift from the 2011 tsunami. Nao tells how she has decided to kill herself – to drop out of time. But first she will write the story of her own life and that of her great-grandmother Jiko, for some unknown person in the future who she believes will find the diary.

Nao’s sections of the story are both amusing and heartbreaking. As they alternate with Ruth’s narrative, it becomes clear there are parallels between the pair. Both are struggling, longing for other lives in other places, feeling out of step with those around them.
Nao has been brought up in America but when the Dotcom bubble bursts her family return to Japan where they live in a cramped Tokyo apartment, her father depressed and unemployed, Nao bullied with extraordinary cruelty at school, and no hope of anything changing.

A summer spent at a temple near Sendai with the ancient Jiko, a nun and novelist, gives Nao a new perspective. She learns to medidate and discovers her family history, becoming fascinated in particular with Jiko’s only son, a suicide bomber in the Second World War.
As she reads through the diary, Ruth’s waking and dreaming lives are increasingly dominated by Nao and her world.  She is convinced she has to help the girl. But has she already killed herself? Was she a victim of the tsunami? Is she even real?  Internet searches turn up no mention of her, and even a brief reference to Jiko disappears shortly after Ruth chances on it.
Ozeki is part-Japanese and A Tale For the Time Being is a fascinating account of that country’s culture. Her real skill though is in blending concept and story so beautifully. The result is a novel that is clever on many levels but also immensely readable.

About the reviewer.
Nicky Pellegrino, an Auckland-based author of popular fiction, is also the Books Editor of the Herald on Sunday where the above review was first published on Sunday 17 March 2013.

Her latest novel When In Rome is set in 1950's Italy and was published in September 2012. Her next novel, The Food Of Love Cooking School, will be published later this year