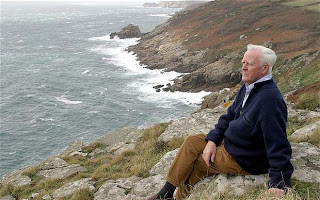 John le Carré was born in Poole, England, on October 19, 1931. He had a gloomy childhood, thanks to the disruptive motions of his father, an erratic businessman who kept the family moving from place to place. After attending a series of private English schools, le Carré was called upon for national service and spent several years in Vienna with the Army Intelligence Corps. When the term expired, he returned to England and enrolled at Lincoln College, Oxford. Graduation was followed by a procession of odd jobs, including one year in which he taught at Eton.
In 1960, le Carré, whose real name is David John Moore Cornwell, resumed his intelligence career with the Foreign Service. During this time he began writing novels, the first entitled Call for the Dead. His second book, A Murder of Quality, appeared in 1962 while le Carré was stationed at the British Embassy in Bonn. Two years later he resigned from the Foreign Service to devote himself entirely to writing. He achieved international fame as the author of The Spy Who Came in from the Cold. His later books include A Small Town in Germany, Tinker, Tailor, Soldier, Spy, Smiley’s People, The Little Drummer Girl, A Perfect Spy, The Russia House, and Our Game, almost all of which have been adapted for movies and television.
The interview took place in the auditorium of New York’s YMHA on a late autumn day in 1996. Le Carré had arrived from London earlier that day to promote the publication of his sixteenth novel, The Tailor of Panama. The auditorium was packed. After the interview he cheerfully submitted to questioning by the crowd, then moved to an adjoining space where autograph-seekers, some carrying more than a dozen books, had formed a long queue that curled around the room. Le Carré, who likes to turn in early, looked fatigued. He stayed on until almost midnight, ministering to each request in a broad, legible hand.


INTERVIEWER
Can you say something about your early reading?

JOHN LE CARRÉ
I grew up in a completely bookless household. It was my father’s boast that he had never read a book from end to end. I don’t remember any of his ladies being bookish. So I was entirely dependent on my schoolteachers for my early reading with the exception of The Wind in the Willows, which a stepmother read to me when I was in hospital. My earliest reading included Maugham, the heroic English storytellers—Henty, Sapper, Peter Cheyney, and thank heaven, the great and wonderful Conan Doyle. I graduated joyously to Dickens and erratically to Bernard Shaw and Galsworthy. And cautiously to the heavy contemporaries—Koestler, Gide, and Camus. But the big explosion in my reading occurred in my late teens when I was seduced by the German muse. I devoured the whole of German literature alive, as it seems to me now. I have probably read more German literature than I have English. Today my pleasure is with nineteenth-century storytellers: Balzac, Dickens, and the rest.


interview in full at The Paris Review
Posted by Beattie's Book Blog at 7:42 pm