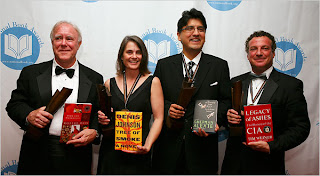 “Tree of Smoke,” a sweeping novel by Denis Johnson about the Vietnam War that features intersecting stories of an array of American and Vietnamese soldiers and intelligence officers, won the National Book Award for fiction last night.
Mr. Johnson, who had been widely favored to take the prize for the book, published by Farrar, Straus & Giroux, was on assignment in Iraq. His wife, Cindy Lee Johnson, accepted the award. She read from a speech Mr. Johnson had prepared, in which he said he was “very sorry to miss this one chance to dress up in a tuxedo in front of so many representatives of the world of literature and say thank you.”
In the nonfiction category, Tim Weiner, a reporter at The New York Times, took the prize for “Legacy of Ashes: The History of the C.I.A.” (Doubleday).
Mr. Weiner, who won a Pulitzer Prize for his reporting on national security programs, examined more than 50,000 documents and interviewed hundreds of C.I.A. veterans for his book, a critical history of C.I.A. failures.
Accepting the award, Mr. Weiner said his work was “a testament to the power of the record revealed and maybe to the fact that our democracy, in spite of everything, is still open enough to see a glimpse of what we have wrought abroad.”
In presenting the nonfiction prize, David Shields, the chairman of the judges’ panel, hinted at a battle among the judges in selecting the winner. “We quarreled, we tussled, we cajoled, we tossed verbal brick-bats, we walked out, we walked back in,” Mr. Shields said.
The awards were presented at a black-tie dinner at the Marriott Marquis Hotel in Manhattan. Fran Lebowitz, the writer and humorist, was the host of the ceremony, and drew laughs when she saluted a roster of previous “nonwinners,” including J. D. Salinger, Saul Bellow, Faulkner and Toni Morrison, who was sitting in the audience.
Each of this year’s winners received a bronze statue and $10,000.
The influence of a National Book Award at bookstores can be mixed. Last year’s fiction winner, “The Echo Maker” by Richard Powers, sold 52,000 copies in hardcover and 31,000 copies in paperback, according to Nielsen BookScan, which measures about 70 percent of retail sales.
Read the rest.
Posted by Beattie's Book Blog at 6:55 am