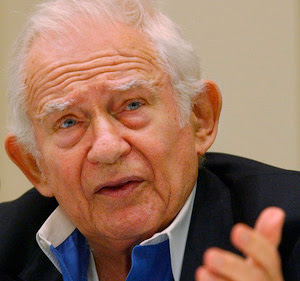 Late Norman Mailer wins 'bad sex' award
Norman Mailer is the first author to win the award posthumously
Late author Norman Mailer has been announced as the winner of the Bad Sex in Fiction Award for the most awkward description of an intimate encounter.
The US writer, who died earlier this year at the age of 84, won for his novel The Castle in the Forest.
Jeanette Winterston and Harry Potter actor David Thewlis were also among those in the running for crude and tasteless literary depictions of sex.
Four hundred guests toasted Mailer's memory at a ceremony in London.
The occasion was also used to pay homage to the renowned American literary figure and the rich variety of his work.
"We were sure he would have taken the prize in good humour," said the judges.
His mouth lathered with her sap, he turned around and embraced her face with all the passion of his own lips and face, ready at last to grind into her with the Hound, drive it into her piety.
Norman Mailer, The Castle in the Forest
Now in its 14th year, the prize is awarded by Literary Review magazine in an attempt to discourage authors from writing such accounts.
It is given to the passage considered to be the most redundant in an otherwise excellent novel.
David Thewlis was nominated for his first novel, The Late Hector Kipling, and Winterson for The Stone Gods.
Highlighted passages from each of the novels were read out by actresses at the event.
The other nominees were Richard Milward's Apples, Ali Smith for Girl Meets Boy, Gary Shteyngart's Absurdistan, Christopher Rush for Will, and Clare Clark for The Nature of Monsters.
Previous winners include AA Gill, Sebastian Faulks and Tom Wolfe. Wolfe was one of the few who declined to receive his award in person.
Story from the BBC but every media channel known to man is carrying the story!
Posted by Beattie's Book Blog at 10:25 pm