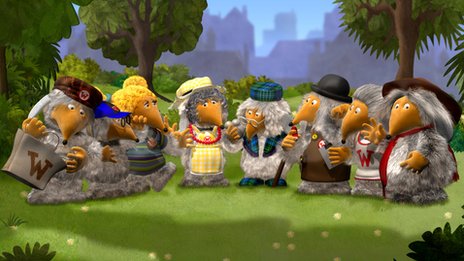 The Wombles of Wimbledon Common are to return to the small screen, in a new Channel 5 series made using computer-generated animation.
Based on the adventures of the loveable London litter-pickers, the 52, 11-minute shorts will air on the channel's pre-school segment Milkshake in 2015.
"The time is right for it to gain a whole new following," said Jessica Symons, Channel 5's head of children's.
Narrated by Bernard Cribbins, the original series first aired in 1973.
Uncle Bulgaria, Orinoco and the rest of Elisabeth Beresford's characters were revived on ITV in 1998.

"There are audiences of new children and international audiences who missed The Wombles the first time around," said Mike Batt, who gave the characters chart success in the 1970s.

I adored the Wombles as a child and credit them for my lifelong compulsion to pick up litter. Love the idea of them having the same effect on a new generation of environmentally conscious children, but I'm a bit worried about the change to computer animation - can never be quite the same.