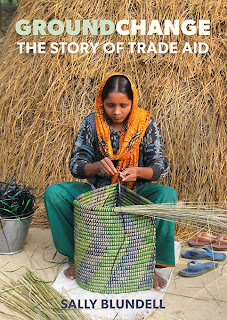 The local Trade Aid store has become a ubiquitous feature in the New Zealand high street. Its story, however, is the largely untold history of the founders of Trade Aid, New Zealand couple Vi and Richard Cottrell, who travelled to India to work with Tibetan refugees in the 1970s. It also covers the development of fair trade, the rise of political activism in this country and the establishment of a business model now respected across the globe.

Groundchange traces Trade Aid from its inception as a small idealistic enterprise that aimed to provide market access to the world’s poor, to a group of 28 shops throughout New Zealand that has engaged thousands of New Zealanders as staff, volunteers and customers. This movement has changed the lives of farmers and artisans in poor, often remote regions throughout the developing world. In shining a light on this vital chapter of New Zealand history this book explores the development of a home-grown trading model based on long-term partnership, fairness, transparency and commitment. Such a model appears to make little business sense, but has succeeded in empowering farmer and artisan co-operatives to break free from a generational cycle of poverty to fulfill goals that they, and not some foreign authority, have determined for themselves and their communities.

Published by Craig Potton Publishing, Groundchange is available from bookshops and libraries nationwide.

About the author:
Sally Blundell is a freelance journalist and editor living in Christchurch. She writes for a number of magazines in New Zealand and, in 2007, edited Look This Way: New Zealand writers on New Zealand artists (AUP), which was short-listed for the Montana New Zealand Book Awards. Her association with Trade Aid began in 1996. Since then she has researched the history of Trade Aid and fair trade in general and conducted interviews with managers and leaders of fair trade organisations across the developing world. This year Sally was commissioned by UK publisher New Internationalist to write The No-Nonsense Guide to Fair Trade.


colour photographs throughout
Posted by Beattie's Book Blog at 10:45 am