Writers who want to follow in the success of some of our most successful authors have the opportunity to apply for the sought after University of Auckland Residency at the Michael King Writers’ Centre. 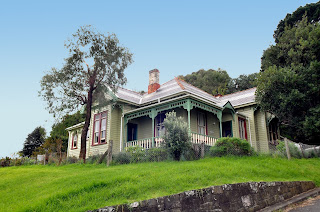 Co-hosted by the Department of English in the Faculty of Arts, the Residency enables a writer to spend six months from July to December 2013 at the Michael King Writers’ Centre, an historic villa in Devonport. The writer also receives an office in the English Department and is supported by a $30,000 stipend.

The Residency is for established authors to devote themselves to a major project.  Writers must be working on a specific project within a range of genres, including fiction, poetry, drama and non-fiction. (Scripts for film, television or radio are not eligible.) Applicants should have a substantial publishing record of proven merit.

Twenty-six New Zealand writers have held residencies at the centre since 2005. The current writer in residence, novelist Sarah Laing, is enjoying the house and the Devonport environment.

“I love coming to Devonport - it's so pretty, a seaside town, and it makes me feel like I'm going on a mini holiday every time I step off the ferry. I go for a walk each day, admiring all the houses and gardens, wishing I could pick some of the oranges growing on the trees.

“At the moment it's exploded into blossom - magnolia, ornamental cherry - and there are legions of tui out-singing each other.”

Sarah hopes to get the first draft of her graphic novel on the life of Katherine Mansfield finished during her residency.
“It's great getting out of my normal working-from-home environment - I am shocked into thinking of things differently, into being more concentrated in my efforts, less distracted by the housework or the internet.”

And Sarah has lots of great advice for aspiring writers.
“Observe how people talk and act, how things seem on the surface, what's actually going on underneath. Keep a notebook on hand. Read lots. Think of all of your bad jobs and difficult experiences as future story material. Cultivate resilience.”

Last year’s resident, novelist Eleanor Catton, wrote the final draft of her novel The Luminaries at the centre last year. The novel is now on the longlist for the prestigious Man Booker Award.

Application forms and further information are available on the centre’s web site www.writerscentre.org.nz or from the centre.  Applications close on Friday October 4, 2013, and the selections are expected to be made in November.
Posted by Beattie's Book Blog at 3:25 pm