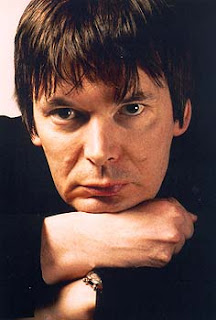 ROGER HALL TALKS TO IAN RANKIN
More than 250 people turned up at Rosmini College Takapuna last night to hear Ian Rankin on his tour promoting the latest (and possibly last) Rebus novel Exit Music. (It’s a damn good read as ever.)
I had the enviable job of interviewing him and mentioned that I had re-read the first Rebus, Knots and Crosses, and towards the end found myself turning the pages as fast as I could in the urge to find out what happens next.
“Ah,” he said “the worst book I ever wrote” explaining that Rebus was too like him, he wasn’t like a real Scottish detective. (At the end I asked him to write in my copy “The worst book I ever wrote” and sign it. In fact he wrote “The 2nd worst book” which, of course makes one wonder …)

Rankin spoke interestingly about the Scottish Parliament and its effect on Scotland, on what was the great religious divide, mostly in Glasgow and the western side and, when we got on to his working methods, how when he starts his novels he doesn’t know how it is going to end. (“Nor”, he said, “does P D James”.)

When I asked him about what other crime writers he read, he named several young writers he admired (alas, I didn’t get the names down), that he often preferred the darker American crime writers (Jim Croce, James Lee Burke) , and yes he liked John Burdett (Bangkok 8).
One name did catch my fancy, because it is set in Tokyo in 1945.. Tokyo year zero by David Peace.
Near the end he spoke of the many and varied projects that he has lined up for next year including a short opera which, he said “begins with a blood bath, ends with a blood bath but with beautiful choral music in between”.
At the end, a huge queue to sign books and today he goes to Dunedin and Christchurch. RH
Posted by Beattie's Book Blog at 1:00 pm