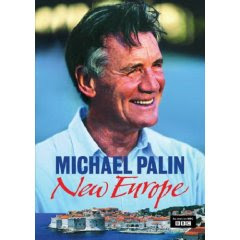 ROGER HALL and MICHAEL PALIN
A huge crowd turned up at Westlake Boys' High on Sunday evening to hear Michael Palin talk about his latest book, based on the new TV programme, The New Europe.
Palin was his usual charming and entertaining self, genuinely liking his audience and eager to aswer their questions.
Finlay McDonald was a skilled interviewer and did an elegant introduction and had clearly done his homework when he read an entry from Palin's Diaries (The Python Years) when Palin mused some time in the 1970s that surely there would one day be "more countries in Europe".
But there was one cringe-making moment when Geoff Chamberlain, in introducing the evening, mentioned that New Zealand would be getting the television series before Australia and the audience burst into applause. Clearly we are so desperate to beat Australia at anything that this was considered a victory of sorts; a moment I'm sure Palin will make good use of some other time. RH
Footnote - New Europe was reviewed by Bookman Beattie last week and his review can be read here.
Posted by Beattie's Book Blog at 1:22 pm