I ran a piece over the weekend about World Book Day and one of the authors involved, Pauline Rowson took the initiative and posted a comment on the blog. One of her titles is involved in the World Book Day, here is a review of that title:

In Cold Daylight by Pauline Rowson 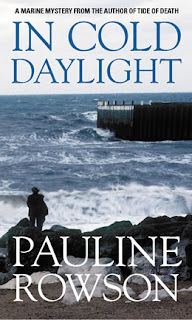 UK fire-fighters are dying long after they've reached the safety of cold daylight from the burning darkness of a blaze. Why? Pauline Rowson, a fire-fighter's wife, wrote the thriller In Cold Daylight after hearing that several fire-fighters from one watch had contracted cancer.
Officially it was a co-incidence but is In Cold Daylight a metaphor for the callous way such fire-fighters are treated? Or is it simply a piece of fictional entertainment? Unravelling Rowson’s cryptic clues in this fast-paced, atmospheric novel, is like playing a thrilling game of pass the parcel.
After unexpected twists, you peel off the layers of literary wrapping to eventually uncover the mystery. Fire-fighter Jack Bartholomew is murdered before he can reveal the truth behind a ship fire, which caused his own cancer and that of several members of his old crew. Jack hides the evidence and posts a cryptic message on a postcard to his best friend, marine artist Adam Greene, urging him to complete the investigation. Adam, haunted by a past tragedy and bullied by his father into depression, would rather be left in peace, but he’s forced to break these constraints by Jack’s death. Special Branch follows Adam’s investigations into secret government research, hazardous chemicals and a corrupt minister, which could bring down a government.

Who then can we trust to seek cures? Just how many cover-ups are there? Is the Turner postcard of a battle ship on route to the scrap yard symbolic of real-life fire-fighters being discarded after contracting cancer? Is Adam Greene a metaphor for the UK’s environmental battle against higher powers?

This book could open a debate that may do for fire-fighters what Ken Loach’s drama Kathy Come Home did for homelessness. The crime thriller is rarely associated with confronting such major issues – or has Rowson changed all this?

Pauline Rowson, who specialises in marine mysteries has her own blog - it's worth a look: http://www.paulinerowsonmarinemysteries.blogspot.com/
Posted by Beattie's Book Blog at 8:48 am