The man who starved literature?

The week in books with Boyd Tonkin in The Independent.
Friday, 27 August 2010 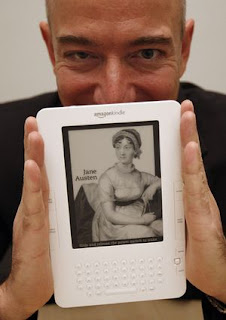 Bane or boon? Amazon's Jeff Bezos with the Kindle - AP

How much ought you expect to pay for a copy of Stieg Larsson's The Girl Who Kicked the Hornet's Nest? Buy the Kindle e-book edition from Amazon, in this case the guys who manage the hardware, the software and the retail pricing alike, and the answer this week is: exactly £2.68, or roughly as much as the posh frothy coffee you might drink while reading a few pages of it. Amazon's dead-tree paperback, for comparison, will set you back a comparatively steep £3.99. Not coincidentally, perhaps, the late Swedish spellbinder last month became the first author to sell a million electronic copies for the Kindle reader.

As the autumn publishing seasons nears with its routine harvest of inflated hopes and overblown claims, let's take a reality check. Just as the the newspaper business did a dozen years ago, when it chose to give its products away online without devising a credible method to replace abandoned revenues, trade publishing stands at risk of committing hi-tech suicide. True, digital distribution did not by itself inaugurate the crazed rush to strip perceived value from the art, skill and labour of writers everywhere, and to encourage younger consumers to treat literary talent – as they already treat journalistic and musical talent – as an effectively cost-free service that should arrive on tap, almost gratis.

In Britain, the catastrophic double whammy of the late 1990s – the abolition of statutory price maintenance for books, backed with a refusal to enact US-style controls on monopolistic discounts – soon seeded the belief that the proper value of an expensively-produced £20 hardback lay somewhere around £7.99. Supermarkets had already steamrollered publishers with their piled-high, flogged-cheap way with bestsellers when "kindle" still meant lighting a fire under a pile of unwanted paper. And, for all the company's control-freak paranoia about both technology and content, Apple has so far played relatively fair with publishers – and authors – to keep prices in its iBookstore at a level at which the art, and business, of the book has some hope of long-term viability.

Amazon, with its more varied, inexpensive lines of kit and broader range of titles, looks well placed to resist Apple's bid via the iPad to become the retailer of choice for digital readers. Yet Jeff Bezos's company has also led the race towards all-but "free" content: a plunge to the depths that, as e-reading develops, threatens to drown writers and publishers alike. All the same, the cultural shift marked by the crash of virtual reading onto the bargain-basement floor runs deeper than any hunt for corporate villains (or heroes).

Can professional authorship even survive, in the post-Enlightenment sense of a body of individuals who may reasonably hope over a career (rather than via one-off sensations) to gain a livelihood chiefly from the composition and sale of book-length works? Certainly it will, for the blockbusters and brand-creators, and the odd literary superstar. But the corps of full-time pros will shrink – perhaps drastically so.
The full story at The Independent.
Posted by Beattie's Book Blog at 10:46 am