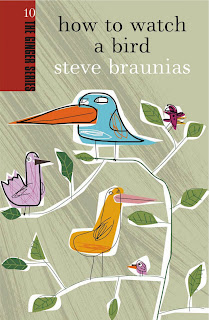 
A couple of weeks back I first expressed surprise at Steve Braunias' conversion to birdwatching and then delight at his new book, How to Watch a Bird from Awa Press.


Yesterday in his weekly column in the Sunday Star Times he had a fascinating piece about Godwits and their remarkable long-distance non-stop flights. For those who do not have access to the Sunday Star Times, and their website is nigh on useless, here is that column which is reproduced with kind permission of the author. 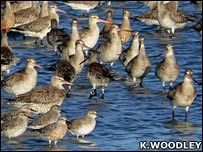 bird land - the arrival of flight Z5 in Alaska

Right about now the last stragglers of a band of 50,000 New Zealanders will have arrived in Alaska in search of sex. It marks the end of an epic journey, a world record, a feat of incredible and mysterious endurance – but such fanfare and trumpetry should stop there, because it’s business as usual for the bar-tailed godwits.
Every year, these wading birds depart our shores and tidal estuaries in both islands for the breeding grounds on the Alaskan tundras. This year, though, methods were in hand for the very first time to accurately track and trace the migratory path. Phil Battley, a Massey University ecologist and New Zealand co-ordinator of the international Pacific Shorebird Migration Programme, is able to announce: “They’ve made it!”
They left New Zealand in late March. About 50,000 birds crossed a world-record distance of over 10,000 kilometres to reach mudflats in and around the Korean peninsula, where they fed up large for about five weeks, and then hived off again in late April, early May to wing another 5000 kilometres until landfall, and the earnest pursuit of sex, in Alaska, the entire population arriving in stages this month, this week, right about now.

Sixteen godwits were caught in nets and given satellite tracking devices in Golden Bay and Miranda this summer. The males wore harnesses fitted on their back; females had small devices implanted in an air sac just below the tail. One female has just hung around Golden Bay, but the first four tagged females to migrate have already reached the snows of Alaska.
Seven male birds have lost their signal. Battley: “Leg tags are not really the bomb.” Two fell off before leaving New Zealand. Two confused males – the harnesses may have got in the way, literally dragging the chain - were last reported hopelessly off-course in Queensland.
But the remaining tagged male – Z5, from Golden Bay – has beaten the odds. It left the Marlborough Sounds on March 18, veered away from the flock, and continued its solo flight to Yap in Micronesia, arriving on March 23. “I wouldn’t have that was wise,” said Battley. It’s a tropical island surrounded by a barrier reef, with an inland lagoon, but without mudflats, the richest source of food for godwits. Battley assumes it fed on crabs in mangrove swamps on the shoreline for the next four weeks.
Z5 left Yap on April 23. Then, on the morning of April 26, satellite tracking confirmed it had turned up on Okinawa Island, in Japan; the news aroused local interest, and a call was made by a man called Ooshiro Kamenobu to Yamashiro Masakuni of the Okinawa Wild Bird Society: “I’ve found it!”
Masakuni later emailed, “How exciting to know that it really came to Okinawa! How wonderful it is that it flies such a long distance with its own wings!!!”
Four exclamation marks from Japan for a wading bird from Golden Bay. Actually, Z5 – which left Okinawa bound for the Yalu Jiang mudflats in China, before its final destination in Alaska - has the eyes of the world on it. The satellite project is in association with the Ornithological Society of New Zealand, the US Geological Survey department in Anchorage, Alaska, and the Point Reyes Bird Observatory Conservation Science centre based in San Francisco.
The satellite signals have established that godwits achieve the longest non-stop flight of any bird. No rest, no food, no nothing, just the relentless physical beating of wings and a fabulous sense of navigation for six days and nights between New Zealand and the feeding grounds of Korea and China. Bravo, etc, and it also makes a nonsense of our national branding.
We are our most famous bird, that freak of nature known as a ratite, or flightless bird – the kiwi. Dour, modest, shy. Feet on the ground and happiest left alone to go about its chores and its rituals in the bush. Nice foundation myth. Good romantic image. Brilliant emblem, too. But the world’s longest recorded migration belongs to the sooty shearwater, or muttonbird, which completes an annual 65,000 kilometre journey from its breeding grounds in New Zealand to winter feeding sites in Japan, Alaska and the west coast of America; as for the bar-tailed godwit, its stupendous path is available to view on Google Earth – past Norfolk Island, New Caledonia, Guam, and North Korea, past the Pacific Ocean and the Yellow Sea, now on the Yukon Delta and other desolations of Alaska.
Take-off in New Zealand can present a fantastic sight if you choose the exact moment to view hundreds, even thousands of godwits rise up and head north; plump after six months on feasting up large on our tides, the males tanned a deep rust-red in anticipation of Alaskan courtship, godwits often leave at early evening. They arrive back here in September, this time having executed a completely non-stop flight – direct from Alaska, no refuelling in Asia – with the new season’s young birds in tow. The exhausting journey means that adults which left New Zealand weighing about 600 grams will have lost half their body weight – one godwit caught and measured just after touching down came in at 247 grams on the scales.
The cycle continues; feed during our summer, migrate to Alaska in March 2008. “Most of the time,” said Battley, “they’re just a brown bird that people don’t much look at.” 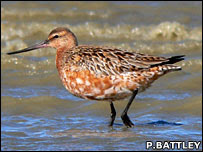 Pics. of Godwits, left Dr.Phil Battley, who is mentioned in the story above, and photo above of group of godwits,
(a new collective noun?), by Keith Woodley.
Map above showing Godwit migration from USGS Alaska Science Center.
Posted by Beattie's Book Blog at 11:26 am