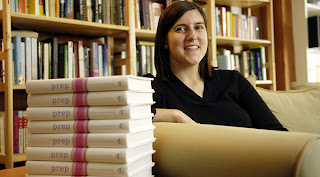 "People think that publishing is a business, but it's a casino."

This totally fascinating story from today's New York Times is reproduced below. Compulsory reading for everyone involved in the book business.

Photo, by Mike Mergen, shows Curtis Sittenfeld with her first novel, PREP, which surprised her publishers by selling 133,000 in hardcover. Here is a selection of reviews.

NEW YORK: When Shana Kelly, a literary agent at the William Morris Agency, submitted Curtis Sittenfeld's first novel, "Cipher," to book publishers in 2003, she had high expectations. She contacted nearly two dozen high-ranking editors at major publishers, expecting every one to make offers for her client's coming-of-age story set at a boarding school. Within weeks, though, most editors had passed."They loved it but weren't sure they could sell a lot of copies, because they couldn't figure out how to market it," Kelly said.In the end, Random House was the only publisher to make an offer, giving Sittenfeld a $40,000 advance.

Random House published "Cipher" in January 2005, renaming it "Prep" and backing it with a clever marketing and publicity campaign. But the initial print run was just 13,000 copies, not enough to generate added royalties on the $40,000 advance."Prep" proceeded to confound all expectations by making the New York Times best-seller list a month after publication. The hardcover, with a cover price of $21.95, eventually sold more than 133,000 copies, according to Nielsen BookScan, which captures about 70 percent of sales. The paperback also became a best seller, selling 329,000 copies to date. Foreign rights have been sold for publication in 25 languages, and Paramount has optioned the movie rights.The book was buoyed by favorable press and word of mouth.

But other books receive similar attention and go nowhere, so why was "Prep" so successful? Conversely, what causes a book that was all the rage at auction time to fall flat at bookstores?Brian DeFiore, a literary agent, asks: "Is it the cover? The title? The buzz wasn't there? Timing? It wasn't that good?"No one really knows."It's an accidental profession, most of the time," said William Strachan, editor in chief at Carroll & Graf Publishers. "If you had the key, you'd be very wealthy. Nobody has the key."The hunt for the key has been much more extensive in other industries, which have made a point of using new technology to gain a better understanding of their customers.

Television stations have created online forums for viewers and may use the information there to make programming decisions. Game developers solicit input from users through virtual communities over the Internet. Airlines and hotels have developed increasingly sophisticated databases of customers.Publishers, by contrast, put up Web sites where, in some cases, readers can sign up for announcements of new titles.

But information rarely flows the other way: from readers back to the editors."We need much more of a direct relationship with our readers," said Susan Rabiner, an agent and a former editorial director.Bloggers have a much more interactive relationship with their readers than publishers do, she said. "Before Amazon, we didn't even know what people thought of the books," Rabiner said.Most in the industry seem to see consumer taste as a mystery that is inevitable and even appealing, akin to the uncontrollable highs and lows of falling in love or gambling. Publishing employees tend to be liberal arts graduates who enter the field with a starting salary around $30,000. Compensation is not tied to sales performance."The people who go into it don't do it for the money, which might explain why it's such a bad business," said Strachan, the editor in chief at Carroll & Graf.Eric Simonoff, a literary agent at Janklow & Nesbit Associates, said that whenever he discusses the book industry with people in other industries, "they're stunned because it's so unpredictable, because the profit margins are so small, the cycles are so incredibly long, and because of the almost total lack of market research."Publishers do engage in limited number crunching.

In estimating value, editors rely heavily on an author's previous sales or on sales of similar titles. Based on those figures and some analysis - about the popularity of the genre, the likely audience, the possible newsworthiness of the topic of the economy - they work up profit and loss projections.The advance payment to the author is often an estimate of the first year's royalties, usually 10 percent to 15 percent of expected sales.The advance is a liability for the publisher because it is a fixed cost. It does not have to be repaid by the author if it turns out to be an overestimate, which it usually is. But when earned royalties exceed the advance amount, the author is paid more.Calculating the advance accurately would be a prized skill, but no editors claim to have a scientific handle on how a book will sell. Instead, they emphasize the role of intuition and say that while big unexpected losses and gains do happen, somehow it all works out.But results are not spectacular for an industry that had $34.6 billion in net revenue in 2005. Net profit margins hover in the mid-single digits for the $14 billion trade segment, which covers adult, juvenile and mass market titles, with a loss for an estimated 70 percent of titles.

Sales in the trade segment (which includes both fiction and nonfiction) grew 5 percent in 2005 from the previous year, but year-over-year sales growth is expected to decline to less than 2 percent by 2010, according to book industry trade group data. The industry does follow trends to pursue growth, but when it comes to acquisitions, methods have not changed much in hundreds of years, said Al Greco, a professor of marketing at Fordham University."It's the way this business has run since 1640," he said.That is when 1,700 copies of the Bay Psalm Book were published in the colonies."It was a gamble, and they guessed right because it sold out of the print run," Greco said. "And ever since then it has been a crap shoot."There is a "business model" that supports this risk-taking. "Lightning does strike," said Strachan, the Carroll & Graf editor in chief.And so it must.

To make money, the industry depends on perennial sellers and on best sellers. It is not so much the almost sure-fire best sellers by the well-known authors, because those cost so much to acquire and market, but the surprise best sellers. Those include books like "Prep," "The Nanny Diaries" (bought for $25,000, it sold more than four million copies), "Marley and Me" (bought for $200,000, sold 2.5 million copies) and "The Secret" (bought for less than $250,000, sold 5.25 million copies in less than six months)."They're the ones we all hope and pray happen to us one day," said Judith Curr, publisher of Atria Books, which printed "The Secret," a self-help book that explains "the law of attraction."After seeing the movie version of "The Secret," which existed before the book, Curr estimated that the planned book could sell a million copies. Based on what? "Just a feeling," she said, a tingling that went up her spine.All of the major houses have also lost on big bets. One of the highest advances ever paid was more than $8 million for a proposal that became "Thirteen Moons," the second novel by Charles Frazier. He is the author of "Cold Mountain," which sold 1.6 million copies in hardcover.Random House printed 750,000 copies of "Thirteen Moons" for the hardcover release in October. The book became a best seller, but it has sold only 240,000 copies so far, according to Nielsen BookScan. That would account for less than $1 million of earned royalties, under standard contract terms. The paperback will be out next month, further diminishing hopes of selling out even the initial hardcover print run.

"It's guesswork," said Bill Thomas, editor in chief of Doubleday Broadway. "The whole thing is educated guesswork, but guesswork nonetheless. You just try to make sure your upside mistakes make up for your downside mistakes."