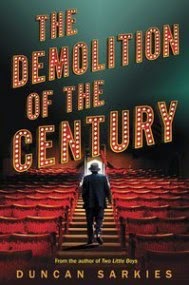 Fresh from performances in the New Zealand Festival, Auckland Writers Festival, Tauranga Arts Festival and Nelson Arts Festival, Demolition of the Century sees author/performer Duncan Sarkies (Two Little Boys/Scarfies/Flight of the Conchords) stage a humorous and sometimes heartbreaking look at families, memories and the fragility of the human mind. Sarkies is accompanied by acclaimed musician Joe Blossom (aka Sean O’Brien), performing a soundtrack that is both haunting and invigorating.

Meet Tom Spotswood, an insurance investigator who has lost his socks, his suitcase, his career, his ex-wife and, most importantly, his son, Frank. He is being followed by Robert Valentine, the mysterious owner of the horse with no sperm; Alastair Shook and his van of guards; and Spud, a demolition man who is using his wrecking ball to bring down the most beautiful movie theatre in town, The Century. To find his son, Tom will have to come to terms with his past – a past he ran away from. But first, he will have to find those socks.

“It’s so good to be able to bring the show home to Wellington for an extended season,” says Sarkies. “The reception we’ve had around New Zealand has been fantastic and we’re now also seeing interest for the show abroad too, which is very exciting.”

Demolition of the Century is an atmospheric stage adaptation of Sarkies’ own novel, which was written while often listening to Joe Blossom music. The performance is an exciting hybrid of theatre, musical performance and spoken word. Inhabiting the characters he created, raconteur Sarkies brings an animated and expressive voice to his writing style, showing its subtle and understated humour. Critically acclaimed composer O’Brien has produced two solo albums under the pseudonym Joe Blossom and collaborated in numerous bands. His work has been featured in NZ films Shopping and How To Meet Girls From a Distance.
“The very successful and hugely entertaining transition of Demolition from book to stage is achieved through a series of brilliant vignettes, delivered in an inspired cabaret-style reading by the multi-talented Sarkies, and outstanding musician Joe Blossom (aka Sean O’Brien)… Demolition is a fast-paced, darkly captivating cabaret-comedy, which leaves us fully entertained and tantalizingly close to solving a puzzle.”
–Bay of Plenty Times

“[The show is] a highly entertaining hour of animated readings and music.”
–Dominion Post