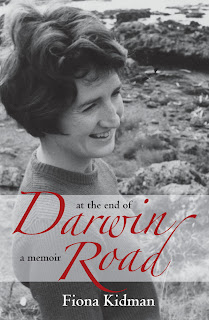 Random House thoughtfully chose to launch Fiona Kidman's memoir during New Zealand Post Writers & Readers Week with a breakfast at the harbourside Circa Theatre. A hundred or so invited guests were treated to a thoughtful speech by author Owen Marshall, one of the best speeches I've heard at a book launch in many a long year. Many people, both those who had been present & those who were not, later asked me if I could get hold of a copy of Owen's comments.

It is with great pleasure then that I reproduce here his fine address, it is worth a read.

Today has special possibilities for those of us at Readers' and Writers' Week – breakfast with Fiona Kidman this morning and afternoon tea with Ian McEwan.
I'm not sure when I first met Fiona; at literary festivals I think, during which only
passing acquaintance is possible, but I came to know her well later through our membership of the Arts board of CNZ and then the NZ Book Council. More recently we both travelled to France as part of a group of New Zealand writers who were guests of the French Govt, and we appeared together at some events there.
I'm delighted to have the opportunity this morning to talk about Fiona and her new book..

Publication of this first volume of Fiona's memoirs is a significant occasion for various
reasons, and I wish to mention some of them. One word that comes to mind when I think of Fiona is involvement - librarian, radio producer, dramatist, critic, prose writer and poet, activist, writing teacher, National President of PEN, wife, mother, the list goes on. She is not an ivory tower writer, and her attitudes, beliefs and interests arise from her deep experience of life and interaction with a broad range of people. This involvement and experience constitute one reason this book has such wide appeal and relevance. The other main element is of course the special talent for writing itself that Fiona cherished, and fought so hard to develop and express.

So Fiona is a more public writer than most because of her involvement, her espousal of
writerly causes, and the role model status imposed on her, and because of her sustained
achievement, culminating in 1998 when she became a Dame Commander of the New Zealand
Order of Merit.

The Fiona Kidman most of us know is that portrayed on the backs of her more than twenty books, and through magazine and newspaper articles, radio and television interviews. It is the bright surface of success, and true as far as it goes, but life's coin has two sides and the reverse is aften as pertinent and characteristic as the obverse. In this book, `At The End Of Darwin Road', we have Fiona's own revelation of the person behind the writing – and as would be expected it is original but not self absorbed, honest without parading the sensational, or showing vindictiveness. It is reflective, perceptive and encompasses all aspects of life, not just artistic concerns. It is a story fascinating in itself, but also one that gives us a greater understanding of her writing. It is a story in which many women in particular will see reflections of themselves.

Most of us have times in our lives when we are oppressed by a sense of difference, or
loneliness, perhaps that feeling is stronger for artists than others, and in this book Fiona deals
with this issue with an insight that rings true. Her late night walks alone, begun as a young girl,
were a feature of other periods of her life also. She deals honestly with personal
problems of excessive drinking, parental relationships, and depression, which beset her for a
time.

She also shares the successes, the fun, the comradeship, the growing confidence in her own
talents and worth, and above all perhaps, the value of a successful marriage. Fiona talks often
of Ian – in conversation, and in this memoir – and acknowledges his distinctive abilities and
the value of his support. One writer said that any marriage is more interesting than any murder.
Marriages are complex, fluctuating, many end in separation or disappointment, all have their
tensions as well as joys. Fiona knows all that, but makes clear the depth of the bond between
herself and Ian, and the crucial importance to her of that partnership. In the memoir she says at one point - `This is the story of my life – Ian walking towards me, never away.' What a tribute that is to both of them.

There is treatment also of close friendships, some very much part of the private life, s

ome,
especially that with Lauris Edmond, part of the public writing life. That friendship had its fluctuations, but was deep and true. I think Lauris and Fiona represented for many women a sort of artistic emancipation and empowerment. Certainly Fiona's novel `A Breed of Women'
published in 1979 is important in a social sense as well as a literary one, and the genesis of that work is made clear in the memoir.

There is too in this book the issue of the clash between art and life, and that is one faced by all serious writers. Cyril Connolly made the famous comment that `there is no more sombre enemy of art than the pram in the hall,' but of course achieving a balance between ones art and ones life is not just a feminist concern. Poverty, drugs, laziness, social expectation, convention, failure of resolve, love, illness, distractions of many kinds, can all be obstacles. In the book we celebrate this morning we see Fiona establishing a place for her art, initially tentatively and aware of disapproval in some quarters, but increasingly with determination, confidence and success. We see the establishment of writing as a necessity and a sustenance in her life.

As I mentioned at the beginning of my remarks, Fiona's memoirs are candid while still
respecting other people. She has the artist's natural curiosity about the lives of others, and the
natural tendency to scrutinise and verify her own life. She notes wryly when writing of her
recent return visits to Kerikeri that this fossicking met with mixed responses. (I quote )

`I visited an elderly woman I had known as a child. She lives down a long, dark driveway and
her rickety house is still full of the treasures of China. “Ah,” she said, swinging a rope of pearls
in her hand, “Your father used to work for us.” I visited one of the Dalmatian women I went to
school with, who has worked in a fish and chip shop all her life. Her olive skin is flawless, and
she seemed genuinely pleased to see me. I called on one of the Maori families whose relatives I
had gone to school with, and sensed they found my visit intrusive. I phoned another woman I
had known when I lived there and asked if we might meet. She was, she said, rather busy
making plum jam that day. “You do rather like to trawl, don't you?” she said, as she ended the
conversation.'

Well, yes, writers do like to trawl, especially if they are writing their memoirs! The plum jam
lady has been nicely caught in the net, but tossed back kindly enough, and still alive.

The writer of a memoir, or autobiography, is confronted with the nature of memory, and realises that time is permeable? That there is a seepage between past and present, between imagination and reality, no matter how honest the author attempts to be. Yet this is natural and the final effect is often more telling, more true to character and experience, than heaped up fact.

Proust said we can't go back because we are looking for time past, not just a place, L.P. Hartley
said `The past is a foreign country, they do things differently there.'
Fiona says, at the conclusion of this memoir, `I saw for the first time that the Darwin Road which has haunted me for so long, is now a place in the imagination.' So it is, fortunately, and thus through her writing we can visit and enjoy it also.

Over a year ago Fiona and I took a walk together in the Luxembourg gardens of Paris, down
the long avenue with people playing table tennis beneath the lime trees, and the joggers
circulating around the garden plots. I remember her talking about how special the time was for
her and Ian while she held the Katherine Mansfield Memorial Fellowship in Menton. She
remarked that her French acquaintances struggled with the concept of what constituted a Dame, and some found it easier to use the term Baroness. From being `the servant's little girl,' as an employer termed it, in Keri Keri, to being a Baroness on the Cote d'Azure . Now there's a
journey for you, and one that Fiona depicts wonderfully in the book we launch today, and in
the second to follow next year.

What is a book launch? – A defiance and conquest of all the difficulties of writing and
publishing: a celebration of the value of writing, and an affirmation in general of the world of
language and ideas. A dance around the totem pole of literary culture.

'At The End Of Darwin Road' is a splendid book not only because it is written so well, not
just because it concerns someone important in our literature, not just because we recognise
something of ourselves in it, but because we admire the person we come to know better by
reading it. I don't think one can launch a road, so perhaps I'll end by saying it is indeed a
pleasure to declare, not the end of Darwin Road , but its opening this morning.

FOOTNOTE:
Thanks Owen, a fine speech, thanks Fiona, an fine memoir, and thanks Random House, a fine launch.
Read my review here of Fiona's memoir and my interview with her.
Posted by Beattie's Book Blog at 11:22 am