I was both amazed and saddened with this title.
Amazed because I had assumed I would never see another new title with Nigel Cox’s name on it. He died in July 2006 and I thought his novel The Cowboy Dog published that year would be his last.
Saddened when I read this new book, not because the material is sad, although there is one piece that is excruciatingly so, What I would have written, no, sad because it brought home to me what a loss we suffered with this writer’s death at just 55 years of age. He was really just hitting his straps and we will never know what imaginative treasures he may have created.
He was a writer and a bookseller, and for me one brief brilliant period a publisher’s rep, and of course in the last years of his life he was a specialist and most effective museum communicator.

This book, which surely will be Cox’s last, has been edited by his publisher and longtime friend Fergus Barrowman.

In his foreword Barrowman tells how the book came about and amongst other things says “collectively, the pieces in this book provide a surprisingly full autobiography of Nigel Cox the writer. Early experiences and influences, and a long and determined process of self-education, are approached from different angles.”
He goes on to give examples.

Included are both previously published and unpublished work and as Barrowman says “the previously published work is strikingly diverse, and includes essays, an interview, a keynote address, an autobiographical short story, and even two poems. Chief amongst the unpublished items is a journal of the first 18 months of the five years Nigel and his family spent in Berlin, where he worked in a leading role at the Jewish Museum. This especially is a major addition to the canon of Cox’s published work, displaying to great effect the voice he achieved in the later years of his writing life….”

I enjoyed reading everything in this book but those pieces about life in Berlin, especially the inside look at what went on behind the scenes during the development of the museum I found utterly fascinating. He gives us frank and entertaining glimpses of both his personal and professional lives and I found myself totally absorbed.

Barrowman and VUP have done a great job here, and what a treasure this book will be in later years for those three young children of Nigel and Susanna’s left without a Dad. 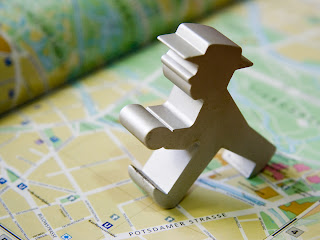 I have only been to Berlin on one occasion but what a happy and interesting time it was. One of the highlights was the guided tour Nigel gave us of “his” museum but we extensively explored on foot for about ten days that most historically and architecturally fascinating of cities.
One of my many warm memories is of the Ampelmann, the traffic light “walk” symbol in the former East Berlin which is now a symbol of the city so I was delighted to see this character featured on the cover of Phone Home Berlin in a great photograph by Cameron Booth.
Posted by Beattie's Book Blog at 7:46 am