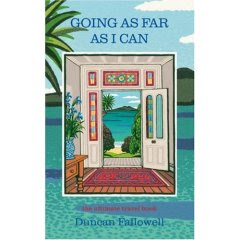 GOING AS FAR AS I CAN – the ultimate travel book
Duncan Fallowell Profile Books NZ$35 A$29.95

This book is being published worldwide on 28 February 2008 and in New Zealand it is going to cause one helluva fuss. In fact I predict it is going to get right up the noses of many a Kiwi and could well become the most controversial book to hit these shores in many a long day. If you are a little thin-skinned when it comes to outside criticism of Godzone then better not read any further.

The author, a well known UK travel writer who also has three novels to his credit, was left some money and decided to use it to travel as far from home as he could. That place is of course New Zealand. He doesn’t know much about the place before his arrival except that Vivien Leigh & Laurence Olivier toured here the year he was born, 1948, and that it was the birthplace of Katherine Mansfield.

So he comes without any preconceptions and, apart from falling in love with Cheltenham in Devonport on Auckland’s North Shore, and hence the superb Tony Ogle painting on the book’s cover, he is pretty unimpressed.

I will write more about this book closer to publication. I haven’t finished reading it yet, but here are a few lines to give you an idea of his style.

It seems ages before the driver gets in and when we pull away it’s to join a crawl along a jammed motorway – over there is Ellerslie racecourse – over here a placard announces that Wanganui Collegiate will be celebrating its 150th anniversary this year – the driver says we are 45 minutes behind schedule and it takes more than an hour to clear the Auckland conurbation – the Bombay Hills…roadside caff: Whitebait & Devonshire Teas – Hamilton, a town of motels and car showrooms – jamis in and out of towns – the by-pass concept hasn’t arrived here yet – stop start jerk – Cambridge with its glamorous stud farms …phew …..now at last – at last – we are more fully into their famous countryside, which doesn’t resemble any countryside that I’ve seen before, and between Cambridge and Tirau it attains to a spellbinding arcadian fruition.


Napier is like Noto, rebuilt after an earthquake in a unified, jolly, rather gimcrack manner. It is billed as the world’s only art deco town…..
This art deco thing – they are not taking it seriously. They think conservation is a matter of printing brochures. Yesterday I saw an art deco shop completely smashed through, its interior of pale green pillars mangled into rubble.

Wellington has been even more catastrophically demolished than Auckland. This is the capital city; so one was looking for style. Style is not achieved by wholesale clearance of the past. And keeping a façade isn’t style, it’s wrapping – that is, it is image and image can have no style of itself since style is not surface but comes from within. The only central street with historical architecture more or less intact is Cuba Street, which isn’t grand but has a fruity liveliness, and they are hoping to put a motorway through it.

The Ascot Park Hotel, Invercargill, is adjacent to the racecourse and much further out of town than it looks on the map. This is because the town in so spread out. The hotel is very spread out too. My bedroom is very spread out. And now I’m spread out, lying on my back and staring at the ceiling. You see, I decided that I couldn’t stand Wellington’s devastating atmosphere any longer and what I had to do was jump on a plane and make an immediate swoop to the very bottom of the South Island, a wise decision as it turned out, because the moment I exited Invercargill’s mini-airport I felt a cleansing better air. Wellington is a city in psychosis, floundering between feebleness and iconoclasm, a city which doesn’t know what it is.

There is more, a lot more but his will do for now…………………….
Footnote:
There are many names mentioned of people he meets along the way including, so far, several prominent in the book world - Patricia Grace, Morrin Rout & Iain Sharp.

Posted by Beattie's Book Blog at 5:39 am

Its quite easy to see why this chap had to wait until someone left him some money before he could go anywhere isnt it?
I have actually travelled the world to its furthest flung corners - and paid for it myself out of my own pocket....and one of the worst places to travel in is the UK. The people are generally rude. The price of everything is robbery - even by their standards. And homelessness; drug addicts; poor wretced environments; anti social behaviour - and the unbelievable obnoxiousness of the people who staff their airports has to be experienced to be understood.
What we must not do is buy this book. Simple.

Should we examine Fallowell's motive in writing this book? And equally, should we measure the yardstick he uses as a basis for his judgement? If England is the standard ... it's a no-brainer, isn't it? He is Anna Kavan reincarnate, jaded, acerbic, afflicted with a misguided delusion of social superiority.