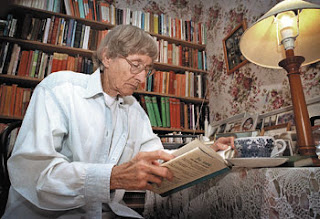 The Big Book Club is taking the opportunity to celebrate one of Australia's no-longer-living literary treasure, Elizabeth Jolley.
From Brisbane's Courier-Mail:
December, with its focus on finishing up the year and frantic preparation for Christmas frivolities, doesn't easily lend itself to touring authors. Jolley, who died in February, was born in Birmingham in 1923 to an English father and a Viennese mother and grew up in the Black Country of Britain's industrial Midlands. The tensions between her parents – between her pacifist father's anxious tenderness and her mother's sense of both exile and entitlement (she was the daughter of an Austrian general) inform Jolley's books as clearly as they influenced her life.
Initially home-schooled with her younger sister, Jolley was 11 when she was sent away to a Quaker boarding school and 17 when she started nursing in war-torn London.
It is no wonder that her novels are full of the pain of exile and loneliness, of inimical educational institutions, bewildering routine and wrenching, repetitive partings, all drawn with a bleak and gently self-mocking humour.
Jolley migrated to Australia with her husband and three children in 1959 when Leonard Jolley was offered the post of librarian at the University of Western Australia.
She had been a writer of diaries and stories from childhood and continued to write in her new country, financing the typing and postage of her manuscripts with the sorts of jobs that could be organised around the family: a CV that read, in her own words, "door-to-door salesman (failed), real estate salesman (failed) and flying domestic".
The last occupation proved, in the end, to be the most successful.
"Cleaning someone else's house is unemotional and the mind is left free for the development of ideas," Jolley comments, noting also that her domestic experiences furnished material for some of her first published short stories and for the character of Weekly, the cleaning-woman narrator of The Newspaper of Claremont Street. But in the main, the literary world wasn't yet ready for Jolley's ideas: for almost two decades she received little but rejection slips – 39 of them in one memorable year.
Jolley was 53 by the time her first book – a collection of short stories, The Five Acre Virgin – was published by Fremantle Arts Centre Press, but by then she had also amassed an extensive collection of virtually completed manuscripts.
Her books appeared steadily at a rate of about one a year between 1979 (The Travelling Entertainer) and 2001 (An Innocent Gentleman), four collections of short stories, 15 novels and three books of non-fiction and just as steadily they began to garner prizes and accolades.
The tributes have continued since Jolley's death. The Melbourne Writers Festival has instituted an annual lecture in her name, and Penguin, her publisher for more than 20 years, has honoured her literary legacy by releasing one of her most famous novels in their Modern Classics series.
The Well, The Courier-Mail's Big Book Club selection for December, is a haunting, open-ended, Gothic tale set on an isolated property in the West Australian wheat belt through which Elizabeth Jolley used to travel to teach creative writing in prisons. Winner of the 1987 Miles Franklin Award, The Well was made into a feature film in 1997, but be warned: the ending of the film deviates markedly from that of the book.
Ugly, elderly, lame Miss Harper is being driven home through the bush from a neighbourhood dance by her pretty protege Katherine. An inexperienced driver hyped up from the dancing, Katherine proves reckless and there is an accident, the subject of which remains unpleasantly entangled in the roo bar of the Toyota truck.
The women are able to dispose of the evidence down their deep, disused well and that should be that until they discover that the well has also swallowed their deepest obsessions. The dead will do anything but lie down, crying out instead in the voices of conscience and greed and awakening sexuality, exploiting well-myth and fairytale to discomfort and disturb.
Lame and lonely all her life, Hester Harper has nevertheless had her position as the daughter of one of the largest landowners in the district. She has been afforded both respect and support, although she recognises and values neither until she has squandered them on her preoccupation with Katherine. When her father dies she continues, despite her age and disability, to run the property.
Katherine is a whim, an orphan taken up "partly out of pity and partly out of fancy". "What have you brought me, Hester? What have you brought me from the shop?"
"I've brought Katherine, Father," Miss Harper said. "I've brought Katherine, but she's for me."
As in several of her other novels, Jolley underlines the fact of fiction, reflexively reminding her reader that this is art rather than life: "I'm writing a perfectly horrific little drama set, do you see, in a remote corner of the wheat. Very regional," confides a new resident, one of the arty hobby-farmers to whom Miss Harper's land has been sacrificed. They sit, the creator and her creation, side by side on bentwood chairs in the general store, companionably devouring family-size sponge rolls from the counter display on the "eat now, pay later" principle Miss Harper has imperiously instigated.
Jolley once described writing as "an act of love carried out in such a way that every aspect of the personality can be examined, not for criticism but for an endless questioning towards a hoped-for understanding".
In her own endless quest for understanding, Jolley's novels interrogate relationships of all kinds, including intense and unequal female relationships like those of The Well, but in particular, her own relationships with the world.
Tall and angular, draped in a shawl at literary festivals, Jolley rather liked to play the dotty old lady, but in her books her astute and loving understanding of the human condition shines nakedly through.
Posted by Beattie's Book Blog at 7:37 am