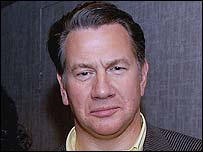 THE MAN BOOKER PRIZE FOR FICTION 2008

THE CHAIR AND JUDGES

For four decades the prize has been seen as the pinnacle of achievement in literary fiction. The award inspires fierce debate and controversy. It is one of the world’s most significant and prestigious literary prizes.

Last year’s winner, The Gathering by Anne Enright, was described by the judges as “a powerful, uncomfortable and, at times, angry book. The Gathering is an unflinching look at a grieving family in tough and striking language.” It has since gone on to sell over 196,000 copies in the UK alone, topped the bestseller lists in Ireland and has now been sold to publishers for translation in 31 countries.

For up to date information and photographs of the judging panel,
please visit http://www.themanbookerprize.com/
THE JUDGES

Michael Portillo- Chair of Judges
Michael Portillo was a Member of Parliament for most of the period 1984-2005, and held three positions in the cabinet. Since leaving politics he has turned to writing and broadcasting. He has made a number of television documentaries, mainly for the BBC, on subjects as diverse as his own father, Richard Wagner, Queen Elizabeth I, Horatio Nelson and the hyacinth macaw. He appears weekly on This Week on BBC1 with fellow presenters Andrew Neil and Diane Abbott MP. Michael has written regularly for the Sunday Times on current affairs and for the New Statesman on theatre. He has been a judge for the Samuel Johnson/BBC4 and Whitbread book prizes.

Alex Clark
Alex Clark has been a literary critic for many years, writing for publications such as The Guardian, The Sunday Times, The Telegraph and The Times Literary Supplement. She currently writes for The Observer and is the Deputy Editor of Granta Magazine.

Louise Doughty
Louise Doughty is a novelist, playwright and critic. She is the author of five novels; Crazy Paving, Dance With Me, Honey-Dew, Fires In The Dark and Stone Cradle, and one work of non-fiction A Novel in a Year. She has also written five plays for radio. She has worked widely as a cultural commentator and broadcaster and is a highly experienced judge of literary awards, in particular those for new and emerging writers.

James Heneage
James Heneage is the founder of Ottakar’s Bookshop chain, which he built to 142 shops, employing 2500 people, at the time when it was sold to Waterstone’s in July 2006. James is now Chairman of The Times Cheltenham Literature Festival, a Non-Executive Director of Mallett PLC and has been appointed a Director of The Prince’s Rainforests Trust which aims to find innovative solutions to the problem of global deforestation.

Hardeep Singh Kohli
Hardeep Singh Kohli is a writer, comedian, actor, presenter, director and cartographer. He is currently working as a regular presenter/contributor for BBC TV and Radio shows including Newsnight Review and has his own column in the Scotland on Sunday and is a guest columnist for The Guardian.
Posted by Beattie's Book Blog at 7:21 am