If I Only Had Time: The John Rowles Autobiography 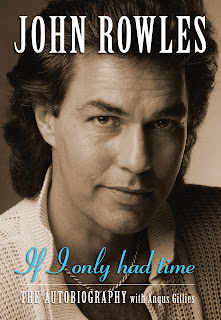 For nearly 50 years, John Rowles OBE, the ‘Kid from Kawerau’ has been one of New Zealand’s most-loved and well-known popular entertainers, with hits such as ‘Cheryl Moana Marie’, ‘If I only had time’ and ‘Hush not a word to Mary’.

Now, in a candid and most readable, and aptly titled autobiography, If I Only Had Time, he shares the highs and lows with captivating stories of British chart-topping success, life as a cabaret star in sunny Hawaii, and singing with some of the all-time greats.
Mixing with the likes of Tom Jones, Elvis Presley, Sammy Davis Junior, Olivia Newton John and Phyllis Diller, John’s A-list tales are a fascinating insight into the music world of the golden era and the flamboyant icons that courted it.

I spent an hour over a coffee with John Rowles this morning at Ponsonby's Dizengoff Cafe and he proved to be a laid -back easy going and affable bloke.He was in Sydney yesterday singing Happy Birthday and other songs to an a friend celebrating her 80th and today he has a full day of media interviews. He noted that the big difference between an author tour and a musical tour is the hour of the day that they take place. He suggested to me he was not an early morning person but I thought for a Monday am after a very late trip back from Sydney last night he was pretty sharp.
He continues to love Hawaii, he lived there on and off for 20 years, but feels very much at home in Auckland and says there is no place he would rather live than New Zealand. He regrets being apart from his two sons but at least they are only a flight away in Sydney and he gets to have them stay in the school holidays.

Looking back now he sees that he made his own music industry success: he had the popular music world at his feet in Britain in 1969 at the age of 21. He would make his break-through in London as psychedelia was at its peak and where The Beatles, The Rolling Stones, Jim Morrison and The Doors, Jimi Hendrix, The Who and Pink Floyd were stealing the world music stage alongside the kings of the ballad, Engelbert Humperdinck, Tom Jones and Cliff Richard. Managed by Peter Gormley, who handled Cliff Richard’s career, Rowles had two hits in the British top 20 and his career was snowballing. 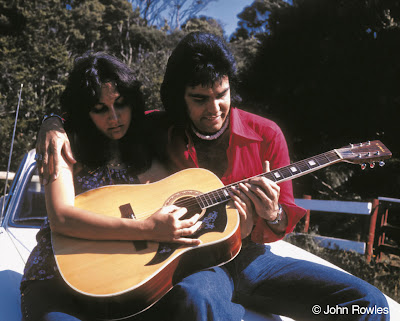 Abpve - With his sister Cheryl Moana, the inspiration for one of his greatest hits.

Yet John’s story tells a tale of regret amid success. As he explains in his remarkably frank autobiography, he often made choices based on his heart rather than his financial head. And he has paid for that. As a young man, a life of sun, sand and beautiful women beckoned him to Hawaii, away from London. Despite being the biggest star on the tropical island, taking regular trips all over the USA, television appearances, being the second youngest headline act in Las Vegas at 23 and travelling back and forth to New Zealand and Australia regularly, and releasing numerous albums – John teetered on the edge of his dream of international stardom.

John may have left Hawaii broke in 1978 and declared bankrupt for a week on the Gold Coast, but he was always welcomed back to New Zealand and Australia with open arms. He toured New Zealand to sold out crowds, kept ‘cranking the albums’ and to his delight, became a father for the first time at 52. 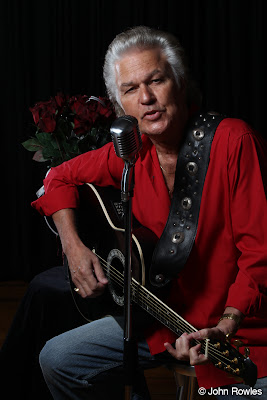 Following a highly successful Farewell Tour of New Zealand last year where he performed over 25 ‘sold out’ two-and-a-half hour shows with his six-piece band, John Rowles shows that at 65 he has still got it, wowing audiences with stellar performances. While John may remember the regrets, in If I Only Had Time he also recalls the highs of his heyday and a lifetime of achievements. He is unquestionably one of New Zealand’s largest-ever international stars.
Told in his own voice and written by journalist Angus Gillies, the story is accessible, fast-paced, full of life and humour and highly readable.

About the ghostwriter
Angus Gillies began his career in journalism at The Gisborne Herald in New Zealand in 1986. He later worked as a reporter for The Dominion, the Auckland Star and the Sunday News. He switched from print to television in 1993 and is currently a producer on 3 News. He has previously published sports biographies on All Black Justin Marshall, Kiwi rugby league star Matthew Ridge and Black Caps cricketer Adam Parore. 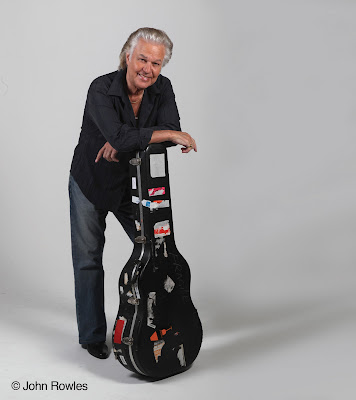