GET FRESH with Al Brown is formally published this Friday 2 November but it was launched in style last evening on the 7th floor roof terrace of Sky City's Grand Hotel, an appropriate location really as it is just upstairs from Al's ever-popular, impossible-to-get-into DEPOT EATERY. The late afternoon sun shone down on us, a good omen for the book. 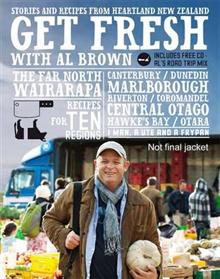 Al Brown is a most agreeable, friendly and passionate man which came across in his marvellous warm address in which he spent much time thanking the individuals from around the country who are featured in his new book and many of whom had turned up for the launch.

Here is his dedication from the front of the book:

To all the small growers and producers in New Zealand, thank you for your dedication and passion, for never giving up, for getting your hands dirty, and for adding another thread to the rich culinary tapestry of this country. I admire and respect you all.

In his address he also thanked the folk from Fish Eye television who made the TV series on which this book is based, his publishers, the musicians who are featured on the CD that comes with the book (more about this shortly), several of whom played during the evening.
He paid an especially warm accolade to his wife and daughters for putting up with his frequent absences as he travelled around the country.
It was a most gracious speech. Well done Al.

Then he introduced muso-extraordinaire Mike Chunn who in turn introduced  several of the artists featured on the CD tucked in the back of the book.


Al had teamed up with Mike Chunn of Play it Strange — a trust encouraging young New Zealanders to develop interests and skills in songwriting and musical performance — to make a special compilation CD of songs from local bands. The idea is you play them as you read the book and cook the recipes and get into the regional mood while hearing some of New Zealand’s most promising talent.
Al said that he " really enjoyed choosing the music with Mike, there are so many gifted, passionate, young musicians coming out through and it was a real delight to be able to include them as a part of the book.’
The tracks were hand-picked to go alongside his loving portrait of regional New Zealand – the perfect song for each region from north to south visiting: Northland, Coromandel, South Auckland, Hawkes Bay, Wairarapa, Marlborough, Canterbury, Central Otago, Dunedin and Southland.

A special night, my warm thanks to Al Brown and his organisation, and to Random House, for including me among the guests at such a bloody good launch. The food was superb (of course) and in great abundance along with a great selection of wine of which I went for the Peregrine Pinot Gris. It was a launch I shall long remember.

Photo below, The Bookman with author/chef/tv presenter Al Brown at the rooftop launch. 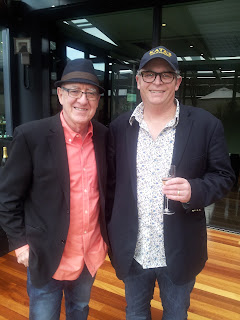 Below - love this map from front of book 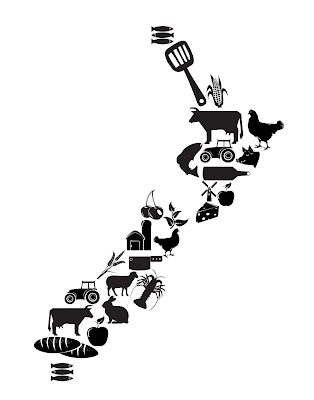 Footnote:
My reference to the impossible-to-get-into DEPOT EATERY is because we have tried now on almost 20 occasions to have a meal there but have never been successful. It has been chocka block every time. We rtied again after the launch. No success!
Posted by Beattie's Book Blog at 11:49 am

Your life must be horrible Graham :)

Someone has to do it Mark and you are far away in the south so I thought I had better put in an appearance.

I really need to know who the artists are on the Cd - bought the book - watched the DVD - and cannot find an easy way to work out who is singing what ...