Jo Nesbø: 'If Salman Rushdie had been Norwegian, he'd have written a thriller' 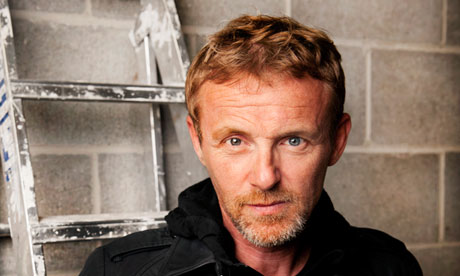 It's not a lot of laughs being Harry Hole – "The Norwegian pronunciation is Hoola, but it's fine if you call him Hole" – the maverick cop at the centre of nine of Jo Nesbø's bestselling Scanda-noir crime thrillers. Over the past 15 years he has been shot, stabbed and beaten up countless times and has the scars to prove it, a titanium finger and a slash from mouth to ear among them. He is an alcoholic who keeps falling off the wagon. His two best friends in the police – pretty much his only friends – have both been killed and he can't get married to Rakel, his long-suffering girlfriend, because she would almost certainly be topped as well. And at the end of The Phantom, his most recent outing, he was left for dead in a sewer with two bullet wounds and rats gnawing at his body
So are there any laughs in being Harry Hole's creator? In person, Nesbø is relaxed, chatty and smiles a great deal and yet ... Pursuing similarities between authors and their characters can be a bit of a dead end and I wouldn't normally bother, only Nesbø frequently draws attention to them. "When I wrote my first book [The Bat, which has just been published in English], I thought I was starting with a blank slate. I remember thinking about whether to make Harry one of those heroes who was a bit different in some way – gay, priest, disabled or whatever – or to run with the stereotype of the hardboiled, troubled
Full story at The Guardian
Posted by Beattie's Book Blog at 10:28 am