I was delighted to receive and read in July a fat orange folder of original poems entered for the Auckland University Press / Divine Muses Emerging Poets Competition 2012. The quality of entries showed some flourishing poetic talent among those studying at bachelors, honours and masters level at this university, and more than a few clearly emerging poets. However, as I turned the pages of the folder, reading and assessing, among the range of poems a few in particular stood out.

For example, I’d like to give a nod of appreciation to Benjamin Blackman’s poem ‘Non-Contributing Sponge Cunts’, for its humour and boldness; to Tessa Forde’s poem ‘My Childhood as a Boy in the Pacific Islands’, for a narrative which hooked me in; and to Toni Duder’s poem ‘Cino’, for its evocation of a changed moment. These poems made me stop to enjoy and consider.

I also paused, impressed, at the work of Sacha Norrie (‘he comes slowly’ and ‘semit derdnuh a deirt i / i tried a hundred times’) and Angela King (‘Scale’ and ‘Learning Centre at the Museum’). I’d like to Highly Commend these two writers for their attention to craft and to detail and for their strongly developing personal voices.

Moving on, I’m pleased to award Second Prize to two poems by Alana Bruce, ‘So cautious, sky’ and ‘We ripped our script apart’, which were quietly expressive, and unfolded carefully with an attention to the transformative capabilities of language.

And finally I’m delighted to give First Prize to Elizabeth Welsh, the writer of ‘Water Buffalo’ and ‘Soft-shelled crab on Fridays’. Both of these poems are very impressive – confident, ambitious, successful at what they set out to attempt. One charts a specific time and experience with evocative but precise concrete details and language; in the other, poised and taut in its control of line and stanza, Elizabeth plays cleverly with some sophisticated poetic conceits and ideas. I liked both poems, but I was especially impressed by the achievements of ‘Water Buffalo’. My warm congratulations to her. 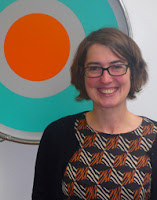 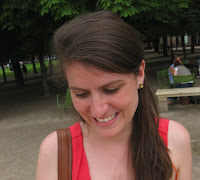 Elizabeth Welsh is a poet and freelance academic editor from Auckland. Her poetry has been published in literary journals, both in New Zealand and internationally. She is currently researching Katherine Mansfield's reviews, preparing for further studies, and has recently spoken on Mansfield at a conference at the Sorbonne in Paris.

Alana Bruce (left) is a 21-year-old undergraduate at the University of Auckland, studying English and Psychology. She moved to New Zealand ten years ago, after having lived in India as a child of missionary parents. Half Swiss, half Kiwi, she now feels like New Zealand is her home country. Having written songs and poetry since she was seven (or so), Alana loves words, reading, and most of all writing (especially with her vintage typewriter!). The 'University of Auckland Emerging Poets' poetry competition is the first competition she has entered her poetry in.
Posted by Beattie's Book Blog at 6:15 am

Congratulations to all the placed poets, but most particularly to our very own "Tuesday Poet" (http://tuesdaypoem.blogspot.com/) Elizabeth Welsh on her win. :)

Thanks so much, Helen & Maggie - your kind words mean a lot to me! I feel very honoured.