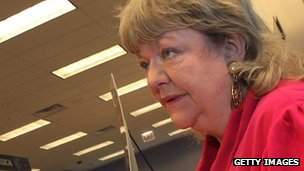 Best-selling Irish author Maeve Binchy has died aged 72 after a short illness.
Binchy, born in Dalkey, Co Dublin, has sold more than 40 million books. Her works were often set in Ireland and have been translated into 37 languages.
They include The Lilac Bus as well as Tara Road and Circle of Friends, which were both adapted for screen.
Binchy trained as a teacher before moving into journalism and writing, publishing her first novel - Light a Penny Candle - in 1982.
She had written the novel in her spare time from her day job as a journalist at The Irish Times.
BBC Dublin correspondent Ruth McDonald said Binchy's warm, witty, perceptive stories, were read and enjoyed around the world.
Our correspondent said the author was renowned for her generosity and support of others, writing in a guide for aspiring writers: "The most important thing to realise is that everyone is capable of telling a story.
"It doesn't matter where we were born or how we grew up".

In a 2001 interview with the BBC after she had won the WHSmith Book Award for fiction, Binchy described the five rejections she received for her first novel as "a slap in the face".
She said she was glad she persevered and sent the book to a sixth publisher.
"It's like if you don't go to a dance you can never be rejected but you'll never get to dance either," she said.
The author said that her secret was to write the way she spoke.
"I don't say I was proceeding down a thoroughfare, I say I walked down the road.
"I don't say I passed a hallowed institute of learning I say I passed a school.
"You don't wear all your jewellery at once - you're much more believable if you talk in your own voice," she said.
Lifetime achievement award In 2000, Binchy was ranked third in the World Book Day poll of favourite authors - ahead of Jane Austen and Charles Dickens.
Binchy received a lifetime achievement award from the Irish Book Awards in 2010, the same year her last novel, Minding Frankie, was published.
She published a personal message on her website thanking fans who had praised the work:
"My health isn't so good these days and I can't travel around to meet people the way I used to. But I'm always delighted to hear from readers, even if it takes me a while to reply," she said.
Binchy is survived by her husband, writer Gordon Snell.
Irish politicians paid tribute to the author on Twitter after news of her death.
Meath East TD Regina Doherty tweeted: "Godspeed Maeve Binchy RIP lovely warm gentle lady brought much joy through all her work."

And from Hachette NZ:
Hachette NZ is saddened to learn of the death of much-loved Irish author Maeve Binchy.


“Maeve Binchy was one of the loveliest writers you could tour,” says Managing Director Kevin Chapman, who remembers her fondly. "She was not only a marvelous writer, but a marvelous person. It's a great loss to storytelling.”
Maeve will be remembered by the Hachette NZ team for her generous spirit. She regularly communicated directly with New Zealand booksellers and was incredibly well regarded across the book trade.
Maeve touched readers all around the world throughout her long career and leaves a legacy of best-selling novels.
Posted by Beattie's Book Blog at 12:22 pm