Let me say straight up that I do not normally choose to read biographies but I couldn’t resist this one.

Michael Morpurgo is of course an English author, poet, playwright and librettist,best known these days for his work in children's literature especially of course for War Horse although I hasten to add that he has been shortlisted four times for the Carnegie Medal and he won the 1993 Prix Sorcières (France): King of the Cloud Forests and all of the following:

So he has a considerable body of work in addition to his most famous title; in fact he has written over 150 books for children dating back to 1974,(a full list appears at the back of the book).


He was the third Children's Laureate having been very involved in setting it up in the first place, inspired by his friend the late Ted Hughes.. 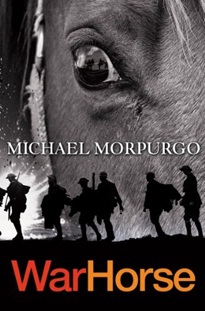 I guess though it is War Horse (originally published in 1982) for what he will long be remembered. The book sold modestly well but after becoming a play at the National Theatre in 2007 and then a Spielberg movie in 2011 it has sold close to two million copies and has now been translated into more than 40 languages. In a way it is appropriate that this should be the case as that book is particularly about reconciliation, remember the opposing soldiers meet in no-man’s land because he admits in this biography that reconciliation is what he “yearns for most”.

The biography  reveals the troubled relationships which Morpurgo has with his children and which have yet to be repaired.
Although his daughter was interviewed for the book both of her brothers declined any involvement and in the biographer’s list of acknowledgments they are conspicuous by their absence.
Although Morpurgo has a close relationship with all six of his grandchildren,(there is a lovely photo of them together in the book), the biography reveals that his troubled relationship with his sons remains a source of regret which, he says in the book, "lasts longer than any kind of pleasure that comes from success."

The book describes how in 1975, his children were then 12, nine and eight, Morpurgo and his wife Clare,(who by the way is the eldest daughter of Penguin Books founder, the late Sir Allen Lane, but that is another whole strand in the book that I could discuss at length), moved to a 50 acre farm, Nethercott House, in Devon where they set up a charity,Farms for City Children, which provided city children with the opportunity to experience life on a farm for a week.
Working three seven-day weeks in a row before taking a weekend off, the couple channelled huge energy into looking after the visiting city kids so that they were unable to fully devote themselves to their own family.This and being sent away to boarding schools may be behind the subsequent difficulties between the father and sons. He also had a rather difficult upbringing himself not getting to know his birth father until he was almost an adult.

I should mention that the Morpurgo’s farm experience for city kids charity has been most successful and there are now properties in Gloucestershire and Wales with a fourth planned for Scotland. Princess Anne is its patron. They are justly proud of it.

Biographer, Maggie Fergusson is Director of the Royal Society of Literarure and a literary editor. She has previously written a well-received biography of the poet George Mackay Brown.
In this biography she and her subject employ a technique I have not come across before – at the end of each section of the book Michael Morpurgo responds to it with a new piece of fiction so you get a biography and seven previously unpublished short stories. I found it appealing although occasionally distracting.
Clearly Maggie Fergusson has got to know her subject well and seems to like him but the book is no hagiography – Morpurgo is a really complex man with many moods and outbursts recounted – “the colour of your shirt is appal­ling”, he snapped at a deeply embarrassed small girl, who’s asked him a question about where his stories come from, after a reading at a school. I was appalled when I read this.

But the difficul­ties of his nature, the strength of his feelings, the complications of his upbringing, his charitable generosity, his wonderful and energetic work as Children’s Laureate, along with a long and largely happy marriage, (they celebrate 50 years next year and Michael talks of having a church wedding to make up for the registry wedding of long ago, this because neither sets of parents approved and Clare was pregnant), are what make him and his writing so appealing and in particular the biography most entertaining and absorbing.
My only complaint? No index! Unforgiveable in a major non-fiction work.
Posted by Beattie's Book Blog at 12:03 pm