In the books and film, the character of Katniss Everdeen is forced to rely on her bow-and-arrow skills to survive 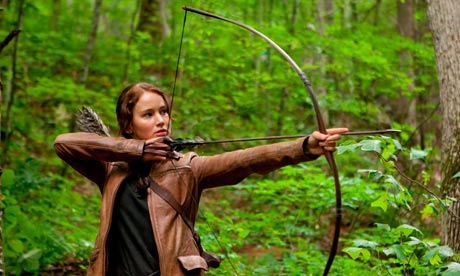 Jennifer Lawrence as Katniss Everdeen in the film of the Hunger Games, the series of books credited with making archery more popular. Photograph: Murray Close/AP

In the US it started with the Hunger Games, while in the UK its popularity has been growing since the film version of the Lord of the Rings - but whatever sparked the frenzy, it's hard to disagree that archery has quietly been becoming cool.

And Friday's Olympic event - which saw South Korean Im Dong-hyun break not one but two world records despite being registered as blind - will only cement the sport's status.
"Last year there was a survey of 12-18 year olds who were asked what Olympic sport they would like to try and archery came out top," said Peter Jones, from Archery GB. He points out membership has already risen from 16,000 people in 2004 to 36,000 in 2012. "Our have-a-go sessions are fully booked and when I went to my local club the other day there was no room for new members"
Heidi Nichol, from 2020 Archery said the Olympics were having an immediate effect. "We've already had a big spike in inquiries thanks to the records being broken."
Both groups say films and TV series of Robin Hood have raised the profile of the sport and they are expecting the new Disney film Brave, about a highland princess who is handy with a bow, to provide another boost to membership when it is released later this year.
In the US, where hordes of teenage girls have been joining archery groups, youth participation in the sport has jumped by 75% in the past few years and shops say their sales of archery equipment have tripled. The phenomenon has been put down to the Hunger Games film and books.
The young adult trilogy of novels by Suzanne Collins and film starring Jennifer Lawrence is set in a dystopian world where the young female heroine, Katniss Everdeen, must rely on her archery skills to survive.
Lawrence was trained to shoot by Khatuna Lorig, one of the athletes representing the US in London's Olympic Games, and the impact has been so marked that the national organisation Archery USA were moved to pen an open letter to Collins, thanking her for making archery "hot."
"Since archery was reintroduced at the Olympic Games in 1972," they wrote "our sport has struggled - and largely failed - to find its cool factor. We completely ruled out the hope of ever having any mass appeal, too … if Geena Davis can be a semifinalist [in qualifying for the US archery team] in 2000 and still no one takes notice, then you know it's unlikely archery will ever be more than a fleeting thought to most Americans."
But, they said, "when Katniss Everdeen started brandishing her bow and arrows on movie screens across America, our phones began (literally, began) ringing nonstop."
The film's impact in the UK has been less dramatic, says Jones. And Nichol agrees that while there was a flurry of inquiries by parents on behalf of their daughters, there was not a marked jump in membership. But an older age group has been drawn in by the increased attention at sporting events like the Commonwealth Games and the Olympics, says Jones. "It's the only time we get any primetime coverage of the sport."
Nichol and Jones both stress the importance of the sport's inclusivity in terms of age groups and physical ability.
"My mum had a go the other day and she could do it and she's 78," says Jones. "It's a great sport for the family to do together. Absolutely anyone can do it. Danielle Brown is one of the best Paralympic compound archers in the world. She is also one of the best archers."
Nichol agrees, "I had someone in this week who was blind and I asked, 'why did you want to try archery?'. He said, 'It just seems adventurous and a little bit dangerous.' It's cool for that reason - it's a weapon but it's safe."
Posted by Beattie's Book Blog at 1:18 pm