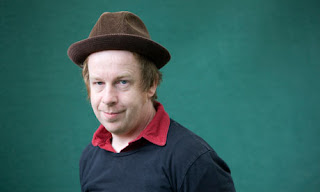 A story about a group of middle-aged men and their passion for authentic beer awarded the world’s most valuable short story prize. The Irish author Kevin Barry will be presented with a cheque for £30,000 by novelist and prize judge Joanna Trollope at a ceremony this evening at the Sunday Times Oxford Literary Festival for his bittersweet tale of camaraderie amongst a group of ale aficionados.

Melvyn Bragg, also on the judging panel, said that the story ‘takes a disregarded and often scorned stratum of male pals and finds wit, pathos and great energy there.’

Kevin Barry saw off competition from a shortlist that included compatriot and Room author Emma Donoghue, who is also currently longlisted for the Orange Prize for Fiction 2012 with The Sealed Letter. She and fellow shortlisted authors Jean Kwok, Tom Lee, Robert Minhinnick and Linda Oatman High each received £1000. Kevin Barry joins a winners circle of American Anthony Doerr who won the Award last year with his story ‘The Deep’ and New Zealander C K Stead who won the inaugural Award in 2010 with ‘Last Season’s Man’.

Hanif Kureishi, prize judge:
‘Our winning story performs a deft bit of alchemy, taking a very ordinary group of amateur ale connoisseurs and transforming them and their not instantly appealing tastes into something sweet, funny and unexpectedly moving. Barry follows the camaraderie and unique bond of these men on their train journey from Liverpool to Llandudno with a sensitivity that never transgresses into sentimentality.

It’s a beautifully constructed piece of writing that says something fresh about how men find comfort, support and humour in each other’s company. This is an astonishing story that is both daringly original and full of heart.’
The 2012 judges were: stage and screen actor Ian Hart; novelist Joanna Trollope; the playwright, screenwriter, novelist, short story writer and director Hanif Kureishi; novelist, screenwriter and broadcaster Melvyn Bragg; and Andrew Holgate, Literary Editor of The Sunday Times. Lord Matthew Evans, Chairman of EFG Private Bank, is the non-voting Chair of Judges.

Kevin Barry was longlisted for The Sunday Times EFG Private Bank Short Story Award in 2011. His first short story collection, There Are Little Kingdoms (Stinging Fly Press), was published in 2007 and was awarded the Rooney Prize for Irish Literature. His first novel, City Of Bohane, was published in 2011 and was shortlisted for both the Costa First Novel Award and the Hughes and Hughes Irish Novel of the Year. Kevin’s stories have appeared in The New Yorker, the Granta Book of the Irish Short Story, and Best European Fiction 2011 among others and his plays have been produced in Ireland and the US. He lives in County Sligo, Ireland. His second short story collection, Dark Lies the Island (Jonathan Cape), which contains ‘Beer Trip to Llandudno’, will be published in April.

The five shortlisted writers this year each received £1,000 – double the 2011 prize money – as well as having their work published online and in a Waterstones anthology which is available to purchase for £2.99 in store and through waterstones.com
Posted by Beattie's Book Blog at 10:48 am