Book dealing was once, as Graham Greene told me, a 'treasure hunt'. But the internet has made it all about pots of gold 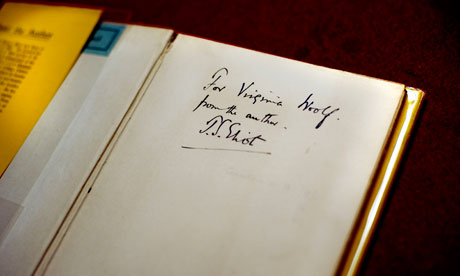 Buy the book … a first edition bearing an inscription from TS Eliot to Virginia Woolf. Photograph: Sarah Lee for the Guardian

I'm not a rare book collector, not anymore. You can't afford to be when you are a dealer, unless you have a lot more money than I do, or a lot less. When I was doing my DPhil on Conrad I accumulated a number of unprepossessing (dust wrapper presence and condition of book immaterial) first editions of his work, seldom for more than a few pounds. I needed these, I had been informed, because the most reliable text of a novel for scholarly purposes is usually the first edition. But in Conrad's case (as I knew) the later Collected Works, published by Dent with new prefaces by Conrad, has texts that were approved by him, and hence constituted his final say on the matter.

I bought the first editions anyway, for reasons more sentimental than scholarly. So this was how the books looked when Conrad himself first saw them! There was something satisfying and historically accurate about reading, say, Lord Jim in the light green cloth, stamped in gilt, in which it would have appeared in shops in 1900. (I wonder if it originally had a dust wrapper? I've never seen one.) But if you had asked me, at that time, if I was a Conrad collector, I would have denied it. (Evidence that I had no real collecting appetite can be found in the fact that JRR Tolkien lived in the house at 21 Merton Street, where I had resided a couple of years before, and was known to be willing to sign books for Merton men. It never occurred to me to ask, though I was a great fan of Lord of the Rings.)

But only a few years after getting my DPhil, and having started teaching in the English department at the University of Warwick, I began a book on DH Lawrence, which is, to this day, the only piece of work I contracted for but failed to deliver. I'm not sure why this was – academic writing and I didn't get on very well – though there seemed an obscure connection to the fact that, this time, I was definitely a fully committed DH Lawrence collector. This new obsession had been fuelled by a small legacy from my mother: at last I could actually afford better things – signed copies of Lady Chatterley's Lover and Pansies, as well as one of the only known copies of Sons and Lovers in its original dust wrapper (previously Dennis Wheatley's copy, for which I paid Blackwell's £350 in 1979). It was a lot more fun collecting Lawrence than writing about him.
Rick Gekoski's full piece.
Posted by Beattie's Book Blog at 5:31 am