The Chemistry of Tears by Peter Carey: review

It is not an exaggeration to say that Peter Carey has given new meaning to the term “historical fiction”. Nowadays novels set in the past are the norm; they seem likely to outnumber those set in the present. In the Eighties, when Carey started writing them, they constituted a separate genre. His early novels were genuinely innovative, and played a large part in that transformation. Impressively, he continues to produce another masterclass every couple of years. 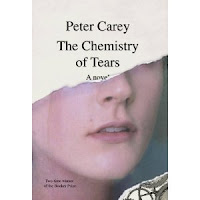 His modus operandi is to intertwine his unique fictions with historical documents – from Edmund Gosse’s autobiography in Oscar and Lucinda (1988), to the work of Alexis de Tocqueville in Parrot and Olivier in America 20 years later, most audaciously Great Expectations in Jack Maggs, most spectacularly Ned Kelly’s letters in True History of the Kelly Gang. His reshaping of history, particularly Australian history, arriving at assertive postcolonial versions of Australian national identity, is central to his technique.
In this, his 12th novel, imperial patronage takes a bashing and Victoria and Albert are glimpsed in their nighties, but the seed of historical truth is the 18th-century inventor Jacques de Vaucanson’s mechanical duck. This famed automaton supposedly ate, digested and excreted grain in front of an audience, but was something of a fraud, because its droppings were made in advance.
Full review at The Telegraph
Posted by Beattie's Book Blog at 7:34 am