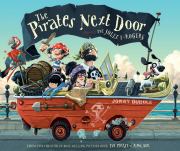 Jonny Duddle, a concept artist for the new Aardman Animation film, The Pirates! In An Adventure With Scientists staring Hugh Grant and Salma Hayek, has won one of the most valuable and prestigious children’s book awards in the country, for his picture book The Pirates Next Door.

Announced at an evening ceremony on Wednesday 28th March at Waterstones Piccadilly, The Pirates Next Door was crowned overall winner of the Waterstones Children’s Book Prize 2012, after winning the ‘Best Picture Book’ category earlier in the evening. Fending off stiff competition from two other category winners (‘Best Fiction for 5-12s’ and ‘Best Book for Teenagers’), it was a good day for Duddle – whose vivid tale of a family of swashbuckling pirates who move to the quiet seaside town of Dull-On-Sea – claimed the top prize on the same day as the film’s release.
The Waterstones Children’s Book Prize celebrates new and emerging talent in children’s writing. Announcing the award, Melissa Cox, Children’s Buyer at Waterstones, described the book as a thoroughly deserving winner: “The Pirates Next Door is full of the anarchic wit and invention children love in a picture book. It’s fresh and fun and has been a huge hit in Waterstones’ shops across the country, and had an incredible reception from booksellers, parents and, most importantly, children. Jonny is a huge new talent in the picture book field.” 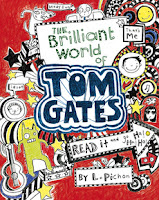 Earlier in the evening, last year’s Waterstones Children’s Book Prize winner, Sita Brahmachari, presented Liz Pichon with the award for ‘Best Fiction for 5-12s’ for her “hilarious” account of a boy’s daily travails in The Brilliant World of Tom Gates; and Jenny Downham picked up the ‘Best Book for Teenagers’ gong for her uncompromising novel of teenage love and family loyalty, You Against Me, which deals with the issue of date rape.

Melissa Cox went on to say: “It was tough picking the category winners, with six excellent books in each. Liz Pichon’s The Brilliant World of Tom Gates won for 5-12s with its perfect marrying of text and illustrations, proving ever popular with children. It’s terrifically funny – it had us all in stitches!”

“We awarded Jenny Downham’s You Against Me the prize for ‘Best Book for Teenagers’ for its unique story, sensitively told. Downham is not afraid to tackle risky, topical themes, and she does so with poise and skill.”

As category winners, Duddle, Pichon and Downham each received a cheque for £2,000 with Duddle, as the overall winner, picking up an additional £3,000, making this one of the most valuable prizes for children’s writing in the UK. The winning authors will also see a significant boost in sales, and the promise of an ongoing commitment to their writing career from all 295 Waterstones branches nationwide.