Publishers might try to draw age boundaries when it comes to reading, but critics should beware such arbitrary distinctions 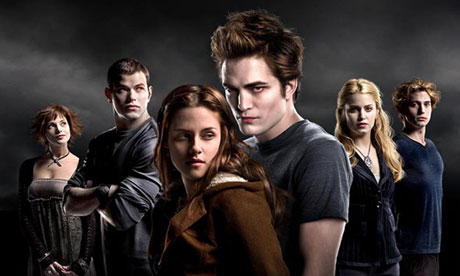 Literary chocolate … Sparkly vampires are just the ticket at the end of a long, hard day

Dividing the world of books into neat categories – children's, young adult, adult – is a relatively recent phenomenon, more of a marketing tool for publishers than a clear distinction for literary criticism. But is there any sense in drawing boundaries when it comes to reading?
The question arises because Joel Stein, a writer for Time magazine, has been having great fun poking the hornets' nest that is the internet, informing us all – grandly, bossily and, I suspect, somewhat satirically – that adults should read adult books.
In a short, sniffy piece for the New York Times, Stein says: "The only thing more embarrassing than catching a guy on the plane looking at pornography on his computer is seeing a guy on the plane reading The Hunger Games. Or a Twilight book. Or Harry Potter."
His argument, basically, is that it's all right for grownups to watch children's films or play video games, but when we're reading, we should be learning.
"I have no idea what The Hunger Games is like. Maybe there are complicated shades of good and evil in each character. Maybe there are Pynchonesque turns of phrase. Maybe it delves into issues of identity, self-justification and anomie that would make David Foster Wallace proud," he writes. "I don't know because it's a book for kids. I'll read The Hunger Games when I finish the previous 3,000 years of fiction written for adults."
Obviously, people are outraged – see the 200-odd comments on Stein's piece, and the miles of Twitter blather ("Does he also believe that women shouldn't wear pants and only Japanese people should eat sushi?"). Obviously, Stein has a book out shortly (he writes on Twitter: "I am the self promoting whore whose book, Man Made: A Stupid Quest for Masculinity, comes out May 15"). But there are wider issues at stake here than a storm on Twitter.
Take the term "young adult", which I rather loathe. It seems unfair to deny authors like Diana Wynne Jones, with Fire and Hemlock, or Alan Garner, with The Weirdstone of Brisingamen, to those in the "old adult" category. (Garner, by the way, has always denied writing for children but says they understand his work better than adults.)
In my view, there's some truly amazing "young adult" writing out there that adults would be childish to overlook. There's also some dreadful tripe. But, while holding my hand up as someone who has read Twilight and Harry Potter, and is avidly reading The Hunger Games right now, there's tripe to be found among adult literature too.
And anyway, sometimes we need the bad stuff. Sometimes, Joel Stein, books aren't for learning, because sometimes – for me, at least – they need to be the mental equivalent of a bar of Cadbury's chocolate. Sometimes, I'm just too knackered to tackle "the previous 3,000 years of fiction written for adults", I'm not in the mood for "Pynchonesque turns of phrase", and sparkly vampires or murderous (but beautiful) teenagers are just the ticket. We were all young adults once, after all
Posted by Beattie's Book Blog at 6:11 am