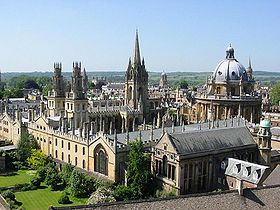 Just back from an appearance at the Sunday Times Oxford Literary Festival, where I was on the platform in a pairing from hell: a double-hander with a thriller writer called Mark Billingham. The subject: genre fiction. The organizers of the Festival clearly detected a link between us, and triumphantly lumbered us with it: Mr Billingham writes best-selling police procedural books, with heavy-handed jokes about place-names like Staines. He is a writer firmly embedded in that particular genre and digging deeper with every passing day, while I have spent the last forty years or so trying to understand and make sense of the orthodoxies that clearly define a genre but also dangerously undermine it. There was no common ground detectable between us.

Oxford in the preternaturally warm March weather looked ravishing, the sandstone colleges and quads glowing in the sunshine, the rivers calm and peaceful, sunbathers and walkers everywhere. The trees stood wintry and leafless above, casting stark shadows over the meadows. It was a time for reflection.
As we arrived in Oxford, the shortlist for the 2012 Clarke Award was announced, providing much material for that reflection.

This year I took an interest in the books that were being tipped for the award, and as a consequence I’m in the unusual position of having read almost everything that is either on the final shortlist as announced, or which narrowly missed being on it.
It seems to me that 2011 was a poor year for science fiction. Of the sixty books submitted by publishers, only a tiny handful were suitable for awards. In my view, candidly, there were fewer than the six needed for the Clarke shortlist. Many of the submissions were fantasy of the least ambitious type, and many of the science fiction titles were almost as firmly embedded in genre orthodoxies, to their own huge disadvantage (and discredit), as the plodding, laddish works of Mr Mark Billingham. Discounting all those submissions did not leave many competitors at the top.
This first impression led naturally to a question that is often asked: what is an award like the Clarke actually for? Well, obviously to reward a writer who is seen to have done well that year. But there is the less often admitted reward for the sponsor, in this case the late Arthur C. Clarke, who evidently liked the idea of a literary award named after him. But with Sir Arthur now gone to the great communications satellite in the sky, the remaining collective motive must be to make some kind of statement to the larger world about the condition of science fiction writing in the present day. We want the best writer to win every year, but we also want to have a showcase to demonstrate that he or she is the best of an exciting bunch, that the overall activity is a progressive, modern literature, with diversity and ambition and ability, and not the pool of generic rehashing that the many outside detractors of science fiction are so quick to assume it is.
In short, the winner of the award must be found within an excellent shortlist, that the win must seem to have been hard-won, and that the choice was the result of reasoned argument and intelligent debate amongst the judges.
So let’s consider the shortlist the judges have come up with in 2012. I’ll begin, briefly, with a note of what they have not included.
Three novels, perhaps four, are outstandingly ignored. In some other year, and to some other group of judges, any of these novels or perhaps all of them would have been seen as natural choices for the shortlist.
Read the full, thoughtful piece at Christopher Priest's blog.

Footnote:
My thanks to Noel Murphy of the NZ Book Council for bringing this thoughtful piece to my notice.
Posted by Beattie's Book Blog at 6:00 am