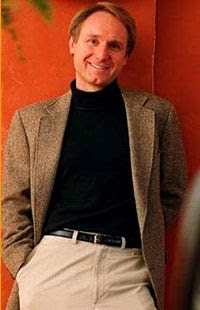 In April 2006 it was advised that the much-anticipated sequel to Dan Brown's mega seller would not be out until 2007. Today The Bookseller carries the story (below) that readers, and booksellers, will now have to wait until 2008.

New Brown unlikely this year
Katherine Rushton
The fifth novel from Dan Brown is unlikely to appear this year, dashing booksellers' hopes that the Da Vinci Code follow-up would hit shelves in the same year as the final Harry Potter. But Brown and Potter may still produce a double whammy of megasellers at a later date, following news that J K Rowling is considering writing a Potter encyclopaedia.
Transworld m.d. Larry Finlay said a Da Vinci follow-up had been budgeted in for 2007 but that Brown had yet to send any material. "It is in the budget, but it was in the budget last year. There is still a chance it will be this year; we just don't know. He'll deliver, I am sure, but I don't know when. It will be published when it's published."
Brown said on his website: "Currently, there is no release date scheduled because the book is not yet near completion." He added that each novel took him "a couple of years" to write. The Da Vinci Code was published in 2003 and has sold 5.1 million copies to date through Nielsen BookScan, topping the UK charts for a record-breaking 66 weeks.
Brown's new novel was originally slated for publication in 2006 and listed on Amazon as The Solomon Key, sparking speculation that it would focus on the masons. But the title was later dropped, and Finlay said Brown has not revealed what he wants the fifth book to be called, or what it will be about‚ other than that it will feature Da Vinci Code protagonist Robert Langdon. On his website, Brown said the new novel would see Langdon "embroiled in a mystery on US soil", and that it "explores the hidden history of our nation's capital".
Meanwhile, Rowling has said on her website that she may "do an eighth book for charity, a kind of encyclopedia of the Potter world so I could use all the extra material that's not in the books". A Bloomsbury spokesman said Rowling has not "confirmed" any plans with the publisher, but added: "J K Rowling has mentioned it in the past, and she has retained all the rights to the Harry Potter series so she could do something like that." Rowling's agent Christopher Little was not available for comment.
Dan Brown Transworld J K Rowling
Posted by Beattie's Book Blog at 1:33 pm