FAREWELL TO AN OUTSTANDING BOOK PUBLISHER

At a most enjoyable bash last week some 200 publishing industry colleagues, university colleagues, authors and booksellers gathered at the Gus Fisher Gallery in downtown Auckland to honour and farewell Elizabeth Caffin on the eve of her retirement as Publisher at Auckland University Press.

Professor Robert Nola , Chair AUP, started proceedings and then introduced Professor Raewyn Dalziel, Deputy Vice Chancellor (Academic), and Emeritus Professor Roger Horrocks who both spoke of the significant contribution Elizabeth had made to the Press over the past 21 years since she took over from Denis McEldowney.

Here are excerpts from those two speeches.

First from Raewyn Dalziel:
The University was extraordinarily lucky at the time to be able to appoint Elizabeth as the successor to Dennis. Elizabeth had an academic background, she understood Universities and the people who inhabit them, she was a writer and understood writers, and she had experience as an editor with Reeds and Collins.

Elizabeth has now managed the Press for 21 years – a year longer than Dennis’s term. Over half the Press’s books have been published during her Directorship. Between 1987 and 2005 when the Press celebrated the publication of its 500th book, 297 books were published. By my count 22 of these books were prizewinning publications.

The Press has made a feature of history, biography, Maori and Pacific books, and art books. Others will say something about the books published by the press – but I would like to acknowledge here Elizabeth’s first love and the series that she has undoubtedly made her own - the poetry series. Herself one of the best and most knowledgeable writer and critic of New Zealand poetry, Elizabeth has published poetry books each year, including those of Allan Curnow, Kendrick Smithyman, Elizabeth Smither, Karl Stead, Ian Wedde, Anne French, Allan Loney, Fiona Farrell Poole, Robert Sullivan, Michelle Leggott, Anne Kennedy and Gregory O’Brien. The poetry collection of the AUP in itself is an outstanding contribution to New Zealand letters.
Under Elizabeth the Press has ventured into new publishing modes – not just the printed page but cds and electronic publishing with the New Zealand Electronic Poetry Centre.
Then from Roger Horrocks:
As a board member I valued the fact that Elizabeth had a clear vision for AUP – that a university press should make a difference and do things out beyond the horizons of commercial publishing - yet still look after the bottom line - because if a university press lost too much money, the bean-counters would move in, or it would end up like the press of a tertiary institution in our vicinity which turned to publishing New Age books on conspiracies and sightings of faces on Mars. To reconcile intellectual weight with accessibility is not an easy balancing act in a highly competitive marketplace. Elizabeth has managed it brilliantly - and her first priority has always been to the culture. This has involved a broad commitment to our university – and for years Elizabeth has given useful advice to countless Auckland academics and students on how to make their research publishable. It’s meant that she also has a commitment, as any good academic publisher must, beyond the university to the culture at large.

One of the secrets of her success is her knowledge of what’s happening out there. A press needs a leader but that leader also needs to be a good listener. Ours is a small, quiet culture, and Elizabeth has very keen antennae. She knows her authors, and is known and respected by them. Authors being authors - insecure and obsessive as we are - this hasn’t always been easy, and Elizabeth has shown much tact and patience.
Rosemary Stagg, herself recently retired (formerly longtime CEO/Publisher of Pearson Education in NZ), then spoke of Elizabeth’s contribution to the publishing industry. Here are excerpts from Rosemary’s speech.
Raewyn and Roger have spoken of the great contribution that Elizabeth has made to Auckland University Press and to the University as a whole. I totally endorse everything that they have said, but would like to focus my remarks on the tremendous contribution Elizabeth has made to the publishing industry and wider book world in NZ. Elizabeth is an extraordinarily modest and often retiring person and therefore not all of you may be aware of just how much she has done to support NZ publishing.

First of all, Elizabeth has played an active part in the NZ Publishers Association, serving on its council for many years and then taking on the president’s role from 2003 to 2005. As is entirely typical of her, Elizabeth performed her presidential tasks with both imagination and thoroughness, making particularly notable contributions in the area of developing NZ publishing, which we might have expected, but also in collecting statistics and developing professional training for the industry.

The publishing industry was handicapped for a long time by the fact that it had no reliable data on such basic things as the size of the book market in NZ, where books ranked in the export league table, etc. It is extremely difficult to lobby effectively or to make the case for books in all sorts of national contexts if this data is not available. One of Elizabeth’s signal achievements was to secure on-going funding so that statistics could be professionally collected each year and now this important information is available to all.

Another notable achievement was setting up a training programme for the whole industry, from which many young, and not so young, publishers benefited. They were able to learn from the expertise and experience shared by senior people in the industry and were given valuable and enjoyable opportunities to network with their peers from other organizations at events such the winter book forums which she revived and revitalised.
But I think what everyone in the book trade thinks of when they think of Elizabeth is her outstanding talents as a publisher, which have been demonstrated for many years. She has made AUP a model of what a university press should be – a publisher of scholarly books that make a significant contribution to our national culture – but she has gone beyond that brief to ensure that AUP’s books are produced to the very highest standards and with great flair, resulting in books that often leave trade publishers grinding their teeth in envy. AUP has been prominent in the general book trade in a way that is unusual for a university press, and we can see that in the great number of prizes that AUP has won over the years – numerous Wattie and Montana book awards, design awards, and being voted Publisher of the Year by the booksellers Association not so long ago.
Elizabeth then responded paying tribute to her authors, the small, dedicated AUP staff, the university and her friends and family and all present. She concluded by saying she was looking forward to reading books, rather than manuscripts, and to writing a book herself.
Following the speeches, (all impressive and appropriate I reckoned), nine poets, published by AUP and/or the NZ Electronic Poetry Centre, delivered an amazing live poetic performance, (it was a play on the letters that make up Elizabeth’s name), much to the delight of Elizabeth and all those present.
The poets in order of appearance were Elizabeth Smither, Paula Green, Murray Edmond, Michele Leggott, Janet Charman, Brian Flaherty, Sue Fitchett, Selina Tusitala Marsh, and Jack Ross.

Elizabeth was then presented with a work of art and the party continued. 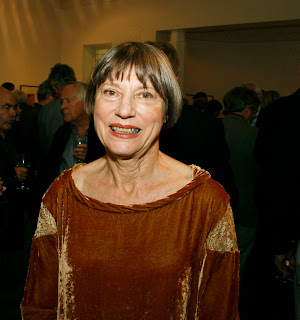 It was a splendid evening and I was chuffed by the tributes that flowed to one who has been a leading light in book publishing in New Zealand for more than two decades.

We salute you Elizabeth.
Auckland University Press is indeed a jewel in the University's crown, due in no small measure to your wonderful contribution these past 21 years.
Photo by Godfrey Boenkhe, UoA.
Posted by Beattie's Book Blog at 8:55 am