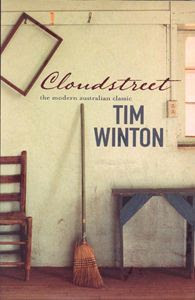 CLOUDSTREET Tim Winton Penguin
I have been a great admirer of Winton's writing for many years but had never read the one that so many regard as a classic, the 1991 Miles Franklin Award winning, Cloudstreet.
Then a month ago while we were on holiday Philip said to me you MUST read it before you hear him speak at the Auckland Writers and Readers Festival.
Penguin Books Australia, to their credit, have both the hardcover and paperback editions in print so last week I treated myself to the handsome hardcover edition (NZ$40) and began reading.

This book is a masterpiece and I rank it among the finest fiction I have ever read. I put it right up there with Vikram Seth's A Suitable Boy, Saturday by Ian McEwan and other great contemporary writing.
Tim Winton is something of a phenomenon on the Australian literary scene and I am looking forward very much to An Hour with Tim Winton at the Festival at 11.00am Saturday morning.
He has won every literary prize there is to win in Australia including the Miles Franklin Award three times - 1984 Shallows 1991 Cloudstreet 2002 Dirt Music.
He won The Australian Vogel Award in 1981 for his first novel, An Open Summer, in the year he turned 21 and he has been writing full time ever since. He also writes fiction for kids among his titles being the award-winning Lockie Leonard, Human Torpedo.
He was born and raised in Western Australia, the usual setting for his books , and still lives there today with his wife and three children.
For more on Tim Winton here are some websites that are worth viewing:
Wikipedia
Contemporary Writers
Sydney Morning Herald
Posted by Beattie's Book Blog at 7:38 am

Hi,
as someone unable to get away from the provinces, I am enjoying your festival blog, thanks.
You mentioned Tim Winton's Lockie Leonard books. I have often receommended the Lockie Leonard books to reluctant young readers of the male persuasion - and they always hit the spot with great feedback from the readers (being interested in surfing helps, but it doesn't really matter). I enjoyed reading them too - as well as his adult stuff - what a great writer. Anyway thanks again.
Lee