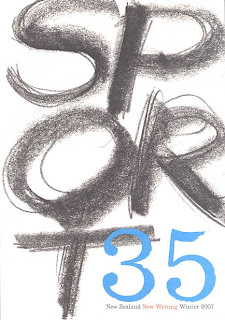 How New Zealand manages to produce two high quality, substantial and well-produced literary magazines like these two is beyond me. I guess the fact that they both come out of university presses has much to do with it. How fortunate we are to have these wonderful publishers in our midst.
Both have been described, by themselves & by critics, as being the leading magazine in the field. One imagines the rivalry between them is quite intense.
They are of course quite similar because they both draw largely on New Zealand writers and they both give generous coverage to new writers.
They are both published twice yearly.
Landfall is of course the much older magazine having been founded by Charles Brasch in 1947
while Fergus Barrowman and a group of supporters started publishing Sport in 1988.
Landfall is $30 a copy and Sport $20.
They both deserve our support.
Posted by Beattie's Book Blog at 9:36 am