Living in Paradox – a history of urban design across kainga, towns and cities in New Zealand by Garth Falconer

How can we develop better urban environments for New Zealanders? Is it a straightforward matter of better planning and applying more resources? Do we have to settle for second best? What of the lessons learnt from those who have come before us? 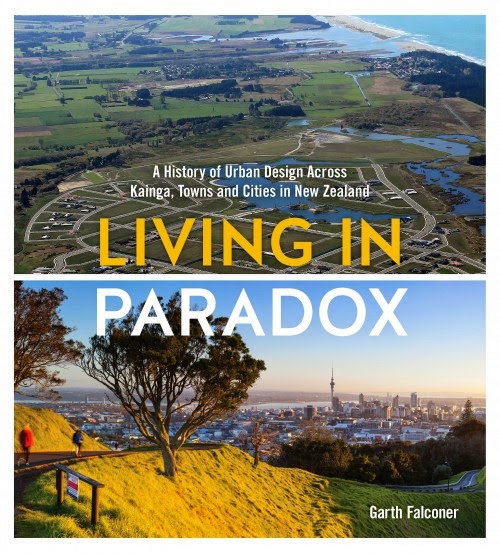 This most handsome and superbly produced landmark book examines the contradictions that form the design of New Zealand’s urban landscape. It analyses many of the various trials and pitfalls of the past, and paints an exciting picture of the way things could be in New Zealand’s towns and cities.

Over 500 pages long and eight years in the making, Living in Paradox is an engaging and accessible book written by leading urban design practitioner Garth Falconer, who is known for public and private developments spanning the country, including Auckland Plan (the city’s blueprint), the newly completed centre of Hamilton and the new, rural destination of Matakana.

Falconer says he wrote the book out of dire need for substance and design to inform the huge and unprecedented investment going into our urban areas.

He suggests that there is assistance in dealing with urban issues by developing a better understanding of natural systems and processes, employing a tradition of informed and aspirational thinking, working actively to incorporate an inclusive culture, making a project of focused identity building, together with broad collaboration across all sectors and a commitment to creative resourceful action.

On Christchurch: “there are real concerns on how long the rebuild is taking and the non inclusive process. Design needs to be the driving factor in the rebuild, not short term concerns over expenditure.”

On sustainability: “Green and clean urban New Zealand is largely a marketing ploy not a reality – it currently works for our second biggest income producer (tourism) but we shy away from taking action in urban environments – where present comfort overrides long term responsibility.”

On our relationship with the land: “Though New Zealand has one of the world’s most complex and dynamic physical environments, we continue to use clumsy and expensive ways of retaining our foothold.
Our appreciation of natural scenery - which is the basis of our cherished tourism industry - has diverted our attention away from better understanding the country’s inherent dynamics and to design for their changes.”

On Auckland: “In the future the urban phenomena known as Auckland will extend from Whangarei to Hamilton and it will help to have good road and rail links.
“There is no silver bullet to solve all of Auckland’s issues. The answers lie in providing more options, more flexibility and more room for the future decisions. Solely limiting land supply and trying to shoehorn people into apartments is poor design.”

Living in Paradox explores the dynamic and intriguing story of this young, vigorous and intriguingly complex country. It is an optimistic, far-reaching book which documents the rich history of earlier visions, analyses many of the various trials and pitfalls of the past, and paints an engaging picture of the way things could be in New Zealand’s towns and cities. As New Zealanders’ are a highly urbanised population this book provides a very relevant and much needed discussion.
About the author:

Garth Falconer is a practising landscape architect and urban designer based in Auckland. Born in the small town of Gore at the bottom of the South Island, he joined the drift north at age ten, moving to Hamilton. Rather than choosing regular career-orientated tertiary studies, he first gained a BA in geography and sociology at Auckland University before by chance happening upon landscape architecture.

Completing post-graduate landscape architecture at Lincoln outside Christchurch and faced with few job prospects, he worked in San Francisco for Peter Walker and Martha Schwartz, then in 1988 formed Isthmus Group along with three other graduates in a converted garage in Auckland. It grew to be a leading practice nationwide. In 2003 Garth took a sabbatical, completing a Masters in Urban Design at Oxford Brookes University in the UK.

Looking for more challenges, Garth left Isthmus in 2008 to form a smaller practice, Reset Urban Design, based in central Auckland, which is involved in a widening range of stimulating projects and initiatives around the country. Garth is known for his design leadership of collaborative multi- disciplinary teams creating strong public-realm projects from large scale to the delivery of detailed built projects.

Footnote:
Be sure to read Chris Barton's thoughtful review of this new title in the April issue of METRO magazine. There are seven pages of book reviews in this issue.