The Search for Anne Perry launched in Auckland 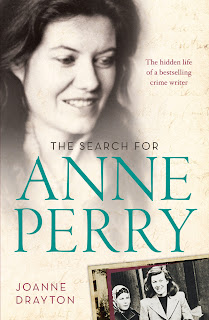 A while back I interviewed author Joanne Drayton about her new book which has been on sale a couple of weeks now and unsurprisingly is featuring on the best-seller list, but last night in Auckland the Gus Fisher Gallery was packed with friends and family of the author, along with booksellers, media types and others, to officially launch the book. 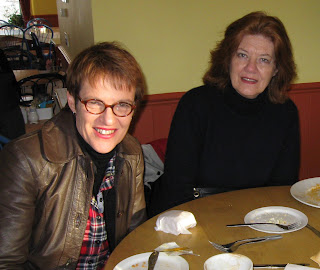 Author Drayton (above left with Anne Perry) was introduced by UNITEC CEO Rick Edd and then she spoke to the gathering. She has kindly made a copy of her address available to me to share with you.

"On the 29 July 1994 – Anne Perry’s worlds collided catastrophically in her outing as Juliet Hulme. (And if you are into karma - this is the same day, 29 July, as the 60 Minutes programme that recently aired on TV3)

It was New Zealand film-maker, Peter Jackson’s Heavenly Creatures that caused the stir that lead to the revelation of Anne Perry’s childhood identity, it was a New Zealand journalist, Lyn Ferguson, who dropped the bomb on Perry’s life that made the news global (by publishing it in the Sunday newspapers) – and I am proud to be here today to say that it is a New Zealand biographer who has brought her worlds and lives together for the first time to tell the whole story in The Search for Anne Perry.

But this did not happen easily. It was an ego-bruising experience.
In 2009, I approached what I thought was Anne Perry to write a literary biography, but it turned out to be a parapet of agents and publishers.
They declined my application. Behind the scenes this is what Meg Davis (Anne’s agent) wrote about me to Anne’s publishers and other agents:

“I don’t think this particular author is the right person. She’s based in New Zealand, which will put Anne’s hackles up. She’s published a biography of Ngaio Marsh, which is clearly her biggest research interest (she’s sent her academic CV), which would suggest that her approach would be more focused on Anne’s work, and less so on her life. However, she’s not got much of a track record [and] … I think we could aim higher.”

As you can see I didn’t give them enough time to aim anywhere other than at me … 6 months later, armed with a proposal and a contract from HarperCollins NZ and (and after they had finally read Ngaio Marsh) – I approached them again – and ultimately Anne Perry and her agent Meg Davis agreed to meet me in London.
The rest is history and the making of history.
It was quite some journey through over 70 novels and novellas written by Anne Perry. And I guess if I had to pick two of my favourite insightful passages in her writing they are these:
Both spoken by Hester to William Monk, an amnesiac slowly recovering his memory (and finding out that he wasn’t a very nice person):

“… it never entered her mind to abandon him. Her loyalty went beyond thrust in innocence or in victory, it was the willingness to be there in defeat, even in one which was deserved.”

“She smiled, but her eyes filled with sadness. She reached out her hand and touched his cheek. It was a soft gesture. It did not dismiss what he had done, or excuse it, but it set it in the past.”

Oddly enough, a book launch is a moment in an author’s life, when worlds collide – when the fractured aspects of one’s life come together to one end – to celebrate. Looking across this room I see the faces of people who have supported me personally; who have supported my work; who have challenged me intellectually, professionally and personally - and most importantly tonight – who have helped make this book and event happen.

I thank you - all of you – for your gifts. For these gifts, are as much a reason to celebrate as any book.
Special thanks to:

UNITEC (Rick Edd, Leon Fourie, Marcus Williams, colleagues especially Gina, Mary-Louise and Mitch – all the academic, library and support staff, the Long Black (who have catered to night) and Marketing that helped organize it – and especially – my students.

For Graham Beattie and his amazing book blog, and for the bookshops that support NZ publishing – especially Unity books (here tonight selling my book) and Carole Beu and The Women’s bookshop, which by the way is hosting the Ladies Literat-Tea on 19 August – there are still a few tickets 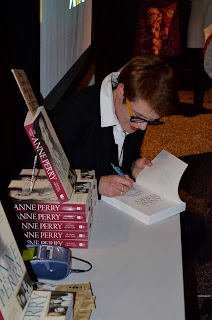 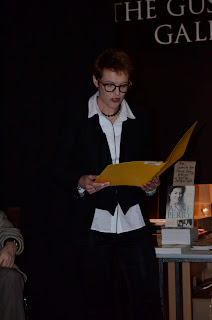 Finally I would like to thank HarperCollins’s Publicity, especially Louise Vallant and Sandra Noakes. These two facilitated the 60 Minutes tv programme, coverage in the Listener, and all the other amazing radio, television and newspaper coverage the book has enjoyed".